Funeral services for Gaylord Luverne Peterson, 85, of Albert Lea will be at 2 p.m. Friday at Bayview/Freeborn Funeral Home. The Rev. Clayton Balsley will officiate. Interment will be at Silver Lake Cemetery. Military honors will be accorded by local servicemen’s organizations, VFW and American Legion. Visitation will be one hour prior to the service. Online condolences are welcome at www.bayviewfuneral.com. 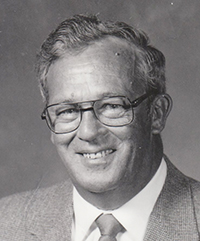 Gaylord Luverne Peterson was born May 18, 1929, on the family farm, the son of Gilbert and Alvina (Lau) Peterson. He attended country school in rural Northwood and Deer Creek. After school Gaylord worked on the family farm.

On Feb. 14, 1952, he was united in marriage to Darlene Sorlien at First Lutheran Church in Albert Lea. Gaylord then enlisted in the U.S. Army. After his discharge he worked at Wilson & Co. for 40 years. He was a member of First Lutheran Church, the American Legion and the Eagles. Gaylord enjoyed doing carpentry, loved working with horses, being around dogs — especially his dog, Kira — and he enjoyed a good debate. Most of all he enjoyed time spent with his family.