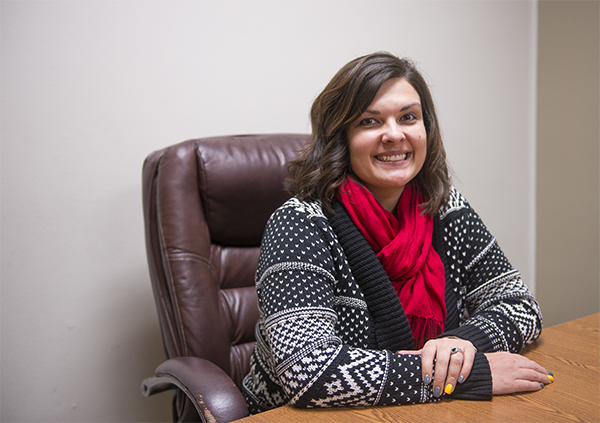 Something needed to be done.

That was Jessica Glassel’s mindset when she decided to become a bone marrow donor.

Glassel, 33, said she was driven to look into bone marrow donation after seeing a woman on the news in need of a donation. She also knew of people going through similarly serious medical issues — such as Albert Lea junior Grace Andersen, who recently underwent a transplant after she was diagnosed with leukemia, and Albert Lea firefighter Brett Boss, who was diagnosed with Ewing’s sarcoma, a rare cancer.

“I felt like it was starting to hit closer to home,” she said. 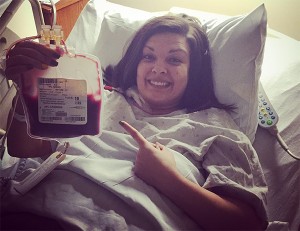 Glassel poses with her donation during her hospital stay earlier this week to donate bone marrow. She said she was told that the recipient is a 41-year-old male in the U.S. — Provided

Glassel grew up in Alden and currently lives in Hayward with her husband, Dennis, and her daughters Peyton, 6, and Ryleigh, 4. Glassel is a teacher’s assistant at Gerard Academy in Austin and her husband is a firefighter for the city of Albert Lea.

She registered to be a bone marrow donor on the website bethematch.org, and said she got a call about nine months later saying that she could be a possible match for a recipient in need. Glassel then received a call one month after that confirming that she was a match and that the procedure would be done in January.

The procedure Glassel underwent to donate is called peripheral blood stem cell donation, a newer and more popular method than the more traditional donation that’s drilled through the hip, she said.

Glassel underwent five days of injections of filgrastim — a mobilizing agent that makes her red blood cells multiply in preparation for the PBSC. She said the drug basically made her bones expand, making her feel achy and like she “had just run a marathon.”

For the procedure Glassel had to have a central line run through her neck because she was told the veins in her arms were too small. She said the donation took a total of six hours and 33 minutes to do 18 cycles. After that she was released from the hospital and returned to Albert Lea the following day on Tuesday.

Glassel said it can be very difficult for bone marrow matches to be found. Glassel said the blood types of the donor and recipient need to match, but bethematch.org said that tissue types — specifically the human leukocyte antigen type — also need to match. The site said HLAs are proteins or markers that are found on most cells in the human body and the immune system uses them to recognize which cells do and don’t belong in the body.

Glassel said there are risks that come with donating as there are with most any medical procedure, but she said that shouldn’t be a deterrent for people who are considering becoming a donor.

“You have to look past that and focus on what you’re trying to do,” she said. “My focus was to help somebody that couldn’t find the help anywhere else.”

She said there were times she wanted to stop what she was doing due to the discomfort of the procedure, but that she would still advise others to go through with donating.

“I would say do it,” said Glassel. “You never know when you’re going to need something like that.”

Glassel also hopes to raise awareness with her donation, as she said she has had a number of people ask her about the process of becoming a donor. She said most people don’t seem to be aware of what they can donate to others.

“They can be a match for anybody,” she said.

People have also commented on why Glassel would want to donate to someone she doesn’t know, and will most likely never meet.

“I don’t care,” she said. “I’m trying to give this person another chance at life because I hope that if I was in that same situation, someone else would do the same for me. … I would do it again in a heartbeat.”