A memorial service will be at 1 p.m. Monday at Bonnerup Funeral Service in Albert Lea. The Rev. Mark Boorsma will officiate. Visitation will be one hour prior to the service. 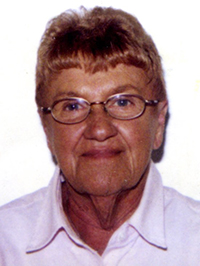 Helen E. McMullen of Albert Lea died Wednesday, Jan. 28, 2015, peacefully at home surrounded by family after a three-year battle with cancer. She was 76.

Helen was born at home near Lake Mills to Tom and Ida (Lingaas) Henderson Feb. 23, 1938. She was married for a short time when she was young and again to Rueben Dokken for about eight years.

On May 5, 1973, she married the love of her life, Brian McMullen. They were married for almost 42 years. She worked for a short time at Fleetguard in Lake Mills and 33 years at Streater in Albert Lea, most of the time driving forklift.

Helen and Brian did almost everything together: fishing, camping, motorcycle riding, snowmobile riding and watching the Twins, Vikings, NASCAR racing and late model dirt track racing. After retirement Helen, Brian and B.J. (their Shi Tzu) spent their winters living in their motor home in Pharr, Texas.