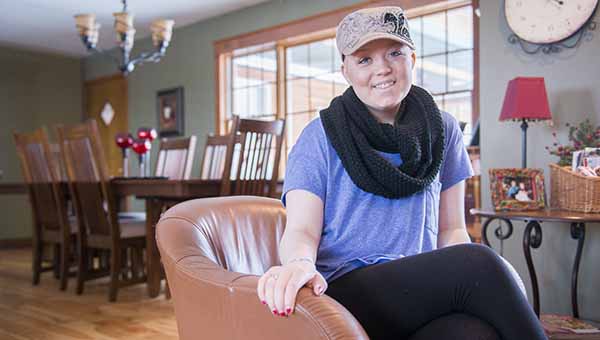 Grace Andersen, 17, was diagnosed with chronic myeloid leukemia Dec. 6, 2013. She said she first found out that something was wrong after she donated blood at a high school blood drive and the Red Cross called her two days later to tell her her white blood cell count was unusually high. – Colleen Harrison/Albert Lea Tribune

A blood donation saved Grace Andersen’s life, even though she was the one making the donation.

One fall day in her sophomore year of high school, Andersen donated blood during a Red Cross blood drive at Albert Lea High School. Two days later, the Red Cross called to tell Andersen that her white blood cell count was abnormally high, and that she should make an appointment with her doctor.

Andersen said she didn’t know what that meant. Her mother, Sue, thought it was an infection of some kind. When Andersen’s doctor, Donald Kammerer, told her that chronic myeloid leukemia was the reasoning behind the abnormal count, she thought he had to be joking. 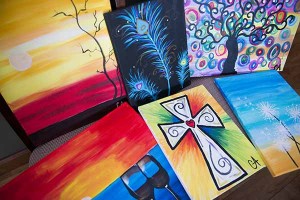 Andersen enjoys painting on canvas, and has done some painting during her hospital stays. One of her paintings will be part of a silent auction Saturday during her benefit. – Colleen Harrison/Albert Lea Tribune

“I don’t think it sunk in at first,” said Andersen. “I didn’t really know what I was in for, to be honest … Just the sound of saying it was scary.”

Chronic myeloid leukemia is a type of cancer that starts in the blood-forming cells of the bone marrow and invades the blood, according to the American Cancer Society’s website.

Andersen said she wouldn’t have felt the need to go to a doctor if it hadn’t been for the Red Cross’ phone call — she hadn’t felt out of the ordinary at all, apart from a cold the day of the blood drive that almost kept her from donating.

“It was a blessing that she donated blood,” said Andersen’s mother.

In the 10 days between Andersen’s being admitted and her having the transplant, she underwent chemotherapy treatments every day. She said there were three different chemo treatments that she had over the course of those 10 days, all of them incredibly strong so that they would knock out as many cancer cells as possible before the transplant. Andersen said she went through three days of chemotherapy following her transplant, as well.

Andersen stayed at St. Marys for a little less than a month from the time she was admitted through her recovery time following her transplant, and then stayed at the Ronald McDonald House in Rochester for two weeks after that before coming home. The McDonald house was a place for Andersen to stay in the area without having to stay at the hospital itself, as she still had to go back for blood transfusions following the transplant.

When Andersen returned home to Albert Lea, she said she had to stay isolated from everyone. She has still had appointments twice a week in Rochester since returning home.

Since being released from St. Marys following the transplant, Andersen’s had to be readmitted on three separate occasions, with each readmission lasting about five days each, she said.

The second and third readmissions were due to hemorrhagic cystitis, which involves bleeding in the bladder. Andersen said those episodes were extremely painful and resulted in her having to be put on narcotics.

All three readmissions took place between October and November 2014, Andersen said. She was able to stay home — other than her regularly-scheduled appointments — up until about four weeks ago. 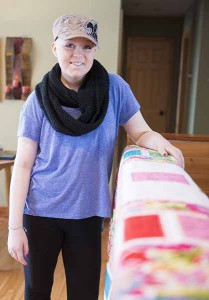 Andersen poses with a quilt that some of her family and friends have signed since she was diagnosed with chronic myeloid leukemia. She is now in remission, and said that it will take about five years without any flare-ups or presence of cancer cells for her to be declared cancer free. – Colleen Harrison/Albert Lea Tribune

In the past four weeks Andersen said she has had urinary tract issues, she now has sinusitis and cytomegalovirus — or CMV. Sinusitis is a sinus infection and CMV is a noncontagious blood virus. The medical issues that have come up in the past few weeks for Andersen are a result of her immune system being extremely weak. She now takes a daily infusion to get rid of the blood virus, on top of the medications she already takes daily.

She currently has a Hickman line leading into her chest that was used for the administration of her chemotherapy treatments, but is also used to draw blood.

Andersen now takes 10 pills in the morning and 10 pills at night every day, plus an additional two pills a day on the weekends. She no longer has to undergo chemotherapy and no cancer cells have been detected in her blood or bone marrow, meaning she’s now in remission. It takes five years without any flare-ups of cancer cells to be considered cancer-free.

The most difficult parts of the ordeal were the chemotherapy and the medications she was on to counteract the effects of the chemo. She said the medication mixed up her memory, making it so there are a number of days or visits in the hospital that she has no clear recollection of.

Another big adjustment for her was having to get rid of her hair. Andersen’s hair is now coming back, but it’s coming back as brown instead of the strawberry blonde it once was.

“When I look back on it now, it doesn’t seem as bad,” she said. “So many more people have it way worse … I’m blessed that this wasn’t way worse than it could have been. It could’ve been so much worse.”

She said the support of her friends, family and the community have meant a lot to her, and have helped her get through the past year.

Many of the people supporting Andersen and her family are having a benefit for her this Saturday.

She said she doesn’t know much about the benefit as she and her family have been barred from helping to make arrangements for it.

The Gracelyn Andersen Cancer Benefit will be from 5 to 9 p.m. Saturday at the Dave Syverson Auto Center showroom with Grizzly Sound entertaining from 9 p.m. to midnight. There will be a raffle, auction and bake sale, as well as a dinner provided by Smokin Bros BBQ. Proceeds from the benefit will be used to offset medical costs.

Andersen is taking classes online, and while she said her recent medical troubles have made her fall behind, she’s sure she’ll be able to catch up through the summer so that she’ll be able to start her senior year this fall at the high school.

Andersen lives in Albert Lea with her mom and dad, Sue and Steve. Sue and Steve co-own 112 on Broadway with another couple. Andersen’s brother, Christian, 21, is a student and intern in Mankato. She said she and her brother have become a lot closer since her diagnosis.

The family considered the diagnosis to be a life change, but one that they’ve gotten through together.

“If you keep a positive attitude about everything it makes it easier to get through,” said Andersen.

“She is amazingly strong,” said Sue. “I admired her and looked up to her before all this just as my daughter, but it’s just incredible, the strength and positivity she has.”