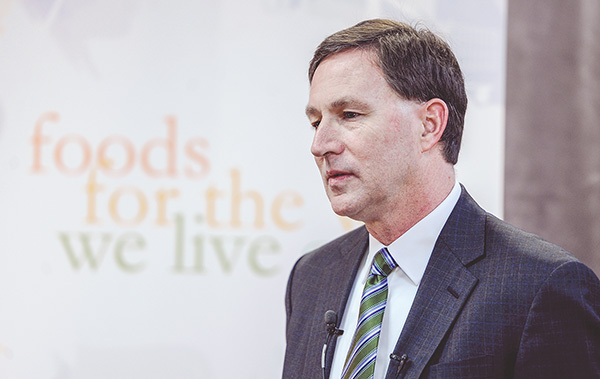 Hormel Foods Corp. CEO Jeffrey Ettinger gives an update of 2014 and what lies ahead in 2015 before the annual shareholder’s meeting Tuesday at Austin High School. – Eric Johnson/Albert Lea Tribune

AUSTIN — Hormel Foods Corp. continued a successful year with a positive outlook and a pledge to continue its success at its annual shareholders meeting Tuesday.

That translated to a 7 percent growth in sales for the company, along with a 12 percent increase in earnings overall.

Hormel President and CEO Jeff Ettinger said the company was pleased with the success the Austin-based company had last year. Hormel will look to its growing brands, such as its recent acquisition of the Muscle Milk protein brand, to help the company expand in 2015.

“We don’t see any reason why we cannot grow that franchise in multiple markets,” Ettinger told shareholders Tuesday.

The company’s fiscal forecast came in slightly under market analyst expectations in November, but company officials are positive Hormel can continue its record growth. Ettinger said the company expects to continue hitting double-digit goals in 2015.

Ettinger said plans are moving forward to build a third refrigerated foods plant in China, which will open next year. That will be the fourth Hormel plant overall in China, as Hormel also has a Skippy production plant there. All products manufactured at the China plants go to the Chinese and Asian markets, according to Ettinger. The company plans to continue growing in the China, Korea and Japan markets, among others.

The company’s Mexican foods brands also continued to grow in 2014, as did the company’s on-the-go products. Wholly Guacamole mini-avocados are Hormel’s highest seller, according to company officials.

Locally, Hormel will add 30 to 40 more corporate employees over the next year as the company’s corporate south office gains more space from the upcoming Spam Museum relocation to downtown Austin. Company officials showed an artist’s rendering of the Spam Museum, which is expected to open in spring 2016, at the end of the shareholders meeting Tuesday.

Ettinger also quashed rumors of a share split Tuesday after he confirmed the company’s board of directors voted against the fiscal move last November.

Hormel donated about $511,000 to Austin area community programs in 2014, not including a substantial United Way campaign last year. In addition, the company gave $6.8 million to help feed others, whether through food shelves or to help relief efforts for disaster areas.