How can city get magic in the air on Broadway? 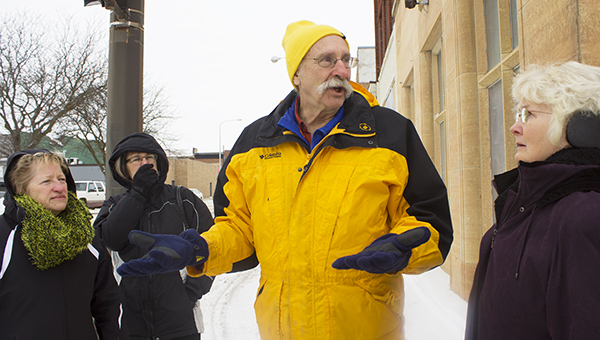 Transportation expert Dan Burden talks with a handful of residents during a walking audit on Saturday morning that started at City Hall and traveled to the intersection of Broadway and Main Street before returning back to City Hall. Burden is in town hearing from residents about what transportation changes they would like to see on South Broadway. He will present his findings and suggestions during a meeting at 5:30 p.m. today at City Hall. – Sarah Stultz/Albert Lea Tribune

These were just a few of the issues brought up Saturday when a handful of city residents braved the cold to go on a walking audit in Albert Lea with internationally known transportation expert Dan Burden. 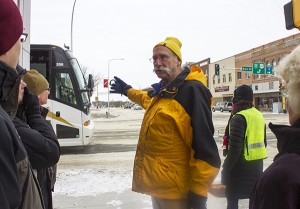 Dan Burden talks about his suggestion for a roundabout at the intersection of Broadway and Main Street during a walking audit on Saturday. – Sarah Stultz/Albert Lea Tribune

In town as part of the Blue Zones Project, Burden and Samantha Thomas, built environment manager with Blue Zones, offered some changes for South Broadway as the project is slated for a Minnesota Department of Transportation bituminous mill and overlay this summer. They also took input from the residents about the changes they would like to see.

Burden will present the findings at a community meeting at 5:30 p.m. today at City Hall.

The walking audit started at City Hall and traveled west to Broadway and then south to the road’s intersection with Main Street. After the audit, the group came back inside City Hall and discussed some changes they would like to see.

Albert Lea Mayor Vern Rasmussen said it is the perfect time to consider changes for the street as the project is slated for a bituminous mill and overlay for this summer.

“This is a great opportunity for the community,” Rasmussen said.

In the summer 2014, the road was reconstructed on Broadway north of Main Street to Fountain Street, and Rasmussen talked of the impact that reconstruction has had on businesses wanting to move downtown.

He said there are presently six businesses looking to come downtown, and he hoped a similar effect would happen on south Broadway once its renovations take place.

Rasmussen said it is his goal to take what Burden and the Blue Zones team conclude and submit it to MnDOT and show there is community support for some updates that are different than just the four-lane road that is presently on South Broadway.

Initially, that could mean some changes simply with paint — additional street parking and bike lanes can be added just by changing paint.

Roundabouts and other changes could happen at a later date.

He said he is supportive of bike lanes down South Broadway, and he said businesses are always approaching him about a need for additional parking, particularly north of Front Street.

He said he thinks the present configuration of Main Street and Broadway have divided the community and deterred development.

“This one here in particular, it destroyed us,” he said of Main Street.

Burden said South Broadway moves 9,000 cars a day and does not warrant being a four-lane highway.

He pointed out the danger for pedestrians of crossing Broadway in front of the Freeborn County Courthouse and said the city lacks a gateway into the community, particularly from the south end.

He said research has shown that roundabouts are safer and reduce speeds.

The group briefly discussed some of the drainage issues on South Broadway and talked about how adding rain gardens and trees could alleviate some of that problem.

Burden’s visit is being paid for by the Blue Zones Project, a partnership between Healthways Inc. and Blue Zones LLC. During the project national experts will draw upon the city’s prior success and assist the city in developing and implementing a blueprint for making permanent environmental, social and policy changes that lead people into healthier behaviors improved well-being.

Burden said there is a separate engineer and photo morphologist working on the project and their work will be submitted as well.