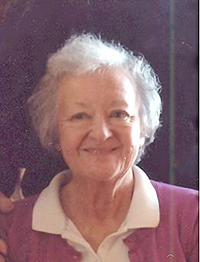 Judith was born April 14, 1939, to Vern and Marian (Massa) Kane in St. Paul. She grew up in the St. Paul area and graduated from the high school in St. Paul. She moved around after graduation, going to California, back to Apple Valley and then to Eagan, and eventually spending her later years in Clarks Grove. She worked in the loan department for various banks before her retirement.

On May 20, 1989, she was united in marriage to Albert Horrocks in Eagan. The couple spent their retirement on the road. They would take their live-in trailer all over the United States and Canada. They usually spent their winters in Texas. Judith always brought along her dog, Sam, who enjoyed the long travels as well.

Judith is preceded in death by her parents and a daughter, Susan.