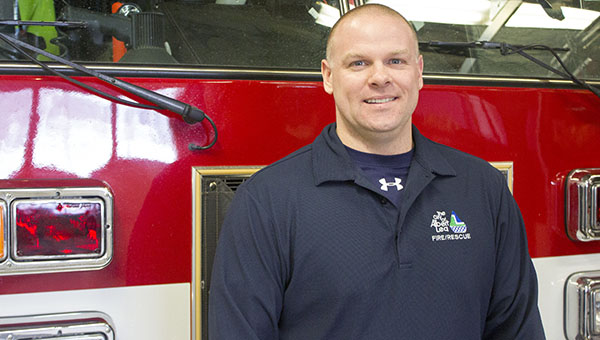 Albert Lea Deputy Fire Chief Jeffery Laskowske stands in front of one of the fire trucks at the fire station. Laskowske started with the city Oct. 6. – Sarah Stultz/Albert Lea Tribune

From the age of 3, Jeffery Laskowske would go into the fire station in Big Stone City, South Dakota, on the weekends with his father.

At the time, his father, who was on the volunteer department there, oversaw the cleaning and maintenance at the fire station. As time went on, his father became assistant fire chief.

When Laskowske turned 16, he started getting involved with the department himself, and he’s never turned back since.

Laskowske in October was hired as deputy fire chief for the Albert Lea Fire Department. Second in command — next to Public Safety Director Dwaine Winkels  — he oversees the day-to-day operations of the department, working with firefighters on the different shifts and overseeing training.

He works with the captains in charge of each shift on what the plans are for each day. There are three shifts of five firefighters, and each shift runs 24 hours.

Though Laskowske typically works during the day, he may come back in outside of that time frame if anything else is needed.

Laskowske said he also responds to fires where it looks like the firefighters might need additional help.

“I love it,” he said. “It’s been a great transition for us. The community is amazing, and the department is a very good department. The guys here are good at what they do.”

He said one of his goals in the year ahead is to work on continuity among the shifts.

The firefighters not only battle blazes, but they also conduct commercial and rental inspections, respond to serious automobile crashes and lead a reassurance call-in program for the city’s elderly, to name a few.

What does he like about his line of work?

“What isn’t there to like about it?” he said. “The ability to do whatever we can for the community.”

He said he and the firefighters hope to become even more involved in the community long term.

Before coming to Albert Lea, Laskowske earned an associate’s degree in 2002 in fire technology from Northland Community Technical College in East Grand Forks.

He said he and his wife decided it was the right time in their lives to make a move and looked at different opportunities that were available. He had been to Albert Lea a few times before and liked the community.

Laskowske said he sees himself and his family in Albert Lea long term.

Winkels said when he was searching for a deputy fire chief, he wanted to find someone with full-time experience in a department who could be proactive and reach out to the community.

“Jeff was the top candidate,” he said. “It was a unanimous choice.”

Winkels said since Laskowske began, he has implemented many efficiencies, including changing the way the fire trucks were loaded for carrying hose, to changing the way all of the equipment is parked in the apparatus bay.

He also is working with some of the other members in the department to implement tablets for the firefighters to use for inspections.