Mower Co. leads state in wind tax revenue over the past 10 years

By Trey Mewes and Jason Schoonover

Mower County has earned more revenue from the state’s wind energy production tax than anywhere else in Minnesota over the past 10 years. 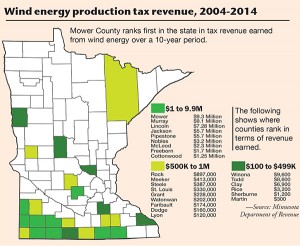 Data from the state’s Department of Revenue and the American Wind Energy Association indicate Mower County has brought in $9.3 million from 2004 to 2014, more than any other Minnesota county. The next highest, Murray County in western Minnesota, earned $9.1 million in that same time period.

“It’s been a boon to the county,” Mower County Coordinator Craig Oscarson said.

In 2014, just under $1.6 million went to Mower County based on 2013 energy production — $1.27 million to Mower County and about $318,000 was distributed among the townships with towers. County officials say the money goes directly toward the county’s budget and offsets tax levies.

The county is set to receive about $400,000 more in funding in 2016 after the Pleasant Valley Wind Farm gets running this year.

Mower currently has about 253 wind towers.