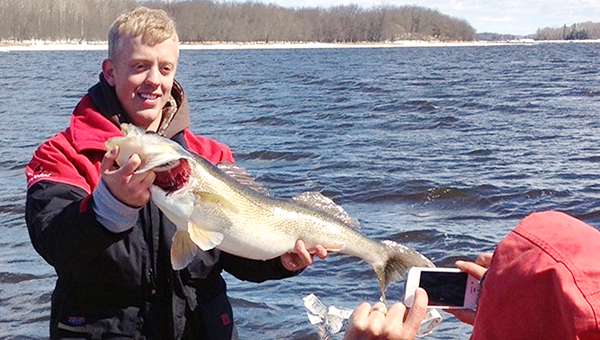 An unknown Albert Lea resident poses with a walleye he caught during catch-and-release season on the Rainy River between Baudette and International Falls in early April of 2014. When the lone fisherman realized he didn’t have a way to record the catch, he shouted over to a nearby boat. The boat’s captain, Patrick O’Kane of Maple Grove, maneuvered his boat next to the unknown man’s boat, and Joe O’Kane of Woodbury jumped into the man’s boat with a tape measure. The fish was 32.75 inches long with a girth that exceeded 17.5 inches and had an estimated weight of 14 pounds. After taking the measurements and photo, the unknown fisherman released the fish unharmed. Joe wants to contact the Albert Lea fisherman to find out if he had a replica mount made of the fish. If any information is available about this Albert Lea angler, please email tribsports@albertleatribune.com. — Provided