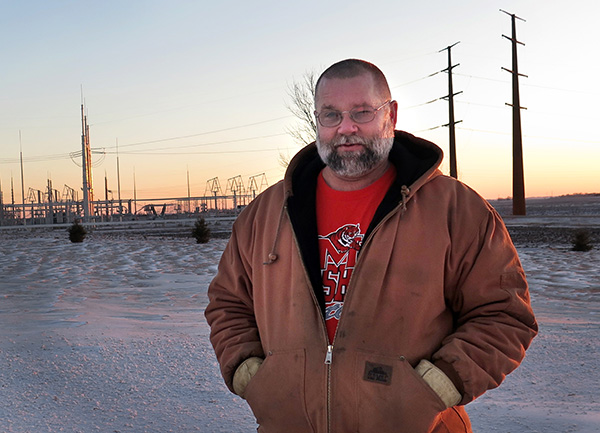 Chuck Muller is not happy that a solar energy project may be built next to his house near Marshall in southwest Minnesota. He says he already has an electrical substation and many power lines near his property. – Mark Steil/MPR News

MARSHALL — Chuck Muller and his family have lived on about eight acres of land for more than 20 years. During that time, they’ve seen big changes, mainly the construction of energy installations near his home.

The latest to hit the drawing board is the Marshall Solar Energy Project, a 500-acre solar panel complex planned for a nearby farm. It’s part of a major solar energy push state lawmakers enacted in 2013.

By 2020, 1.5 percent of the electricity sold by the state’s major utilities, Xcel Energy, Minnesota Power and Otter Tail Power, must come from solar generation.

But Minnesota’s solar energy industry may have run into its first significant opposition. Residents of the rural area in southwest Minnesota are unhappy about the planned solar panel farm. Like his neighbors, Muller hopes it will move elsewhere.

Muller already lives a couple hundred yards away from an electrical substation. Power line poles dot the horizon. He said the prospect of being surrounded on three sides by long rows of solar panels is just too much of an assault on what had been a quiet country setting.

“I thought this was a rural area and it’s not,” he said. “It’s fastly becoming an industrial area.”

Muller and his neighbors have banded together to oppose the solar project, which at this point is still just a proposal. They’ve taken their concerns to the developer, NextEra Energy Resources of Florida. Company spokesman Steve Stengel said the firm is listening to the resident’s complaints.

“We’re very early in the process,” Stengel said. “And it is natural for people to have questions.”

The 62 megawatt solar farm will generate enough electricity for about 15,000 homes. That’s not even three percent of the output of the state’s largest coal fired plant, Xcel Energy’s Sherco facility in central Minnesota.

Stengel said there’s a lot of support for renewable solar power throughout the state. He thinks that even some of the people who now oppose the idea can be won over.

“We believe that when people ultimately understand the project, that we have an opportunity to answer questions, address concerns,” he said. “We think that people will ultimately be supportive of the project.”

But it’s unclear how the company will win over the unhappy homeowners near Marshall.

Tom Allex, a member of the township board, said it may try to slow the pace of the project.

“We may ask for a moratorium,” said Allex, who lives about half a mile north of the proposed site. “We could ask even the county to declare a moratorium.”

But Allex admits it is unclear whether that attempt to block the plan would have any effect, as the state has the main regulatory oversight of the project.

Local governmental units like counties and townships only regulate small solar projects, under 50 megawatts in size. The Minnesota Public Utilities Commission has jurisdiction over developments that top 50 megawatts like the Marshall solar farm.

Dan Wolf, the commission’s executive secretary, said the PUC will first determine whether there’s a need for the Marshall project. He said if the proposal clears that hurdle, the commission will then consider where it should be located and under what terms and conditions. The entire permitting process can take up to eight months.

Residents near the proposed project say solar energy may be a bright beacon in the nation’s energy future, but it’s a dark cloud for them.

Muller is worried no one will want to buy his property if he decides to sell.

“They wouldn’t even give it a second thought to try to buy it,” he said. “Surrounded by solar panels.”