Funeral services for Ralph Gahard Reindal will be at 10:30 a.m. Tuesday at Redeemer Lutheran Church in Alden. The Rev. Greg Ofsdahl will officiate. Interment will be at Alden Cemetery. Visitation will be 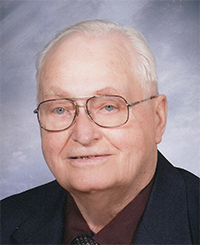 from 4 to 7 p.m. at Bayview/Freeborn Funeral Home and one hour prior to the service at the church. Online condolences are welcome at www.bayviewfuneral.com.

Ralph Gahard Reindal was born Aug. 2, 1924, in rural Alden to George and Selma T. (Overland) Reindal. He was baptized at Lunder Lutheran Church Aug. 24, 1924, and confirmed in 1938 at First Lutheran Church in Albert Lea. Ralph grew up in rural Alden and attended District 56 and Alden Schools. He then continued his education at the University of Minnesota School of Agriculture.

On Sept. 2, 1943, Ralph was united in marriage to Verneta Sauer at First Lutheran Church Parsonage. Ralph farmed until 1967; and then he worked as a mechanic for Sorensen Brothers and later delivered motorhomes for Winnebago making 13 trips to Alaska. He was a member of Alcoholics Anonymous since 1954, the Conger Creamery Board, Faith Lutheran, Walters Church Council, Local 49 Operating Engineers Union and Redeemer Lutheran Church. Ralph had an exceptional sense of humor and enjoyed traveling, driving, fixing things and spending time with friends and family.

Ralph’s family would like to thank the staff of St. John’s Lutheran Community and Mayo Clinic Health System in Albert Lea Hospice for their exceptional care.