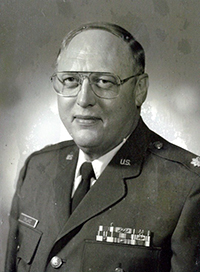 Funeral services will be at 10:30 a.m. Friday at Center Evangelical Lutheran Church in rural Leland with the Rev. Thomas Rank officiating. Visitation will be from 4 to 7 p.m. today at Mittelstadt Funeral Home in Lake Mills and will continue one hour prior to services at the church on Friday. Military honors will be conducted at the church by the Otto Chose Post 235 of Lake Mills. Burial will be at South Shell Rock Cemetery in rural Northwood.

Ronald W. Okland was born April 18, 1940, in Northwood to parents John and Alice (Westendorf) Okland. He graduated from Northwood High School in 1958.  Ronald attended Bethany Lutheran College and later joined the United States Air Force in 1961 as an NCO.  He was commissioned as an officer in 1971 and was later assigned to the USAF Office of Special Investigations.  After retiring from the military, Ron served 10 years with U.S. Customs.

Ron married Carolyn Phillips of Gooding, Idaho, on July 26, 1963.  Ron and Carolyn traveled extensively throughout Northern Europe during his Air Force career, including visits to Norway, Holland and Germany.

Ron was preceded in death by his parents; son, Richard; and two siblings, Michael and Linda.

Memorials may be directed to Center Evangelical Lutheran Church or to Hospice of North Iowa.

You can contact the family with condolences at mittelstadtfuneralhome.com.