Funeral services for Samuel B. Worrell will be at 1 p.m. Wednesday at Community Lutheran Church in Geneva. The Rev. Kristen Venne will officiate. Visitation will be from 5 to 7 p.m. today at the Bonnerup Funeral chapel in Albert Lea. Interment will take place at Geneva Cemetery. 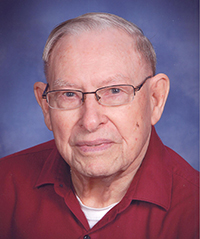 Samuel B. Worrell was born Aug. 24, 1916, to Boyd and Gladys Worrell just outside of State Center, Iowa. He spent his childhood around that area. He was baptized June 11, 1932, in a Lutheran church in State Center. He was confirmed the very next day.

On Jan. 27, 1937, Samuel was united in marriage to Dorothy (Bailey) in Marshalltown, Iowa. To this union, five children were born. Samuel was drafted into the United States Navy in 1944 and served until his honorable discharge in 1946. The family moved to the Geneva area in 1952. Sam and his wife spent their career owning and operating many restaurants in Geneva, Ellendale, Albert Lea and New Richland. Aside from work, Sam enjoyed golfing, fishing, watching the Minnesota Twins and maintaining his flower gardens. In his earlier years you could find him riding snowmobile on winter days like this. More recently, Sam and Dorothy would spend their winters in Arizona, until Dorothy’s death in 2008. Sam was a member of Community Lutheran Church in Geneva and was also a member of the American Legion.

He is preceded in death by his wife, Dorothy; parents; children Robert Worrell and Mary Dray; grandchild, David Dray; and a brother, Arthur Worrell.