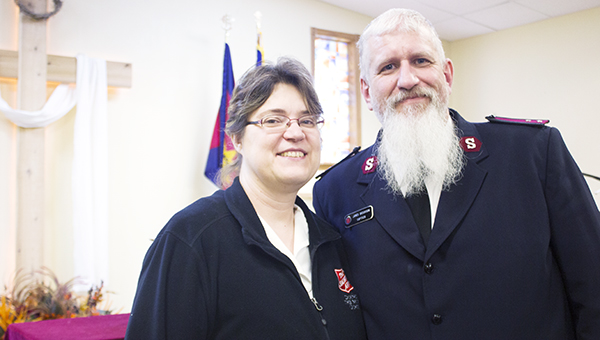 Albert Lea Salvation Army Capts. Lee and Jim Brickson will move to Brooklyn Center on Monday after serving almost eight years in the area. A farewell gathering is slated for 2 p.m. Sunday at the Fairlane Building at the Freeborn County Fairgrounds. – Sarah Stultz/Albert Lea Tribune

After almost eight years of service in the Albert Lea Salvation Army, Capts. Jim and Lee Brickson will leave the community on Monday to begin a new assignment.

The Bricksons, who arrived in Albert Lea in June 2007, will move to Brooklyn Center to be closer to the Minnesota Autism Center, where their youngest daughter, Tianna, will begin school. The school will offer specialized care for Tianna, who is diagnosed with Fetal Alcohol Syndrome.

“We never have any expectation of a time that we stay in a community; however, we feel fortunate that the Salvation Army has seen the benefit of allowing us to stay here this long,” Lee said.

In Freeborn County in the last century, the average stay of an officer has been less than three years. The Salvation Army assigns its officers based on personal gifts, along with reflections and prayer of senior leaders.

Jim said when they first arrived in Albert Lea in 2007 during the onset of a recession, they were right out of the seminary.

“We were really excited about doing work for Christ,” he said.

Since they have been here, he said, he thinks the organization has become an accepted part of the community.

In addition to offering help locally after tornadoes touched down in several locations in Freeborn County, the organization provided relief after natural disasters in Rushford, Cedar Rapids, Iowa, and Minot and Bismark, North Dakota, to name a few.

While they previously had a food distribution program at the food shelf, they also implemented a five-day-a-week community meal, which has been downsized to one day a week, along with the Centershot Ministries archery program for area youth and hosting support groups for people who lost their jobs during the recession, among others.

Jim garnered state and national attention in December 2013 after participating in a bell-ringing challenge with others across the country.

Jim rang for 105 consecutive hours in the center court of Northbridge Mall and broke a previous record for continuous bell-ringing that was set at 80 hours.

“That was a testament of community strength,” he said.

He said the goal from the beginning of the bell-ringing challenge was to bring the community together — and that is what happened.

The couple said this sense of community is something they will never forget about Albert Lea. For the first time in their married life, they noted they felt like they were at a place where they could believe in their community.

“It’s going to be weird to go down the street and not know people,” Lee said.

The couple will conduct pastoral care at their new Salvation Army location in Brooklyn Center.

The Bricksons thanked residents for welcoming them to the community and particularly those who put in extra effort to care for their daughter.

There will be a farewell gathering at 2 p.m. Sunday at the Fairlane Building at the Freeborn County Fairgrounds. Following a program, there will be cake and coffee.

With the Bricksons’ departure, the Albert Lea Salvation Army will be led by Maj. Elsie Cline.

With the departure of Albert Lea Salvation Army Capts. Jim and Lee Brickson to Brooklyn Center, the local Salvation Army will be led by Maj. Elsie Cline, who has served in the city since June. 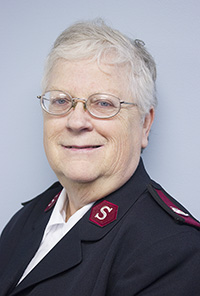 Cline, 61, grew up on a farm in Pennsylvania and said from the age of 10 felt she was called to be a missionary.

“I always felt that was what God wanted me to do,” Cline said.

She is fluent in Spanish and was sent to Albert Lea to help with the Hispanic ministry.

“I love it,” Cline said. “I love the small town. I’m a small-town person, and I love the relationship building.”

She said she recognizes a need to teach English to Spanish-speaking people and beginning today will be offering classes English classes. They will be from 5 to 6 p.m. at the Salvation Army every Wednesday and Thursday.

In June Cline will find out if other Salvation Army officers will come to assist.

“Albert Lea has a lot of potential,” she said.