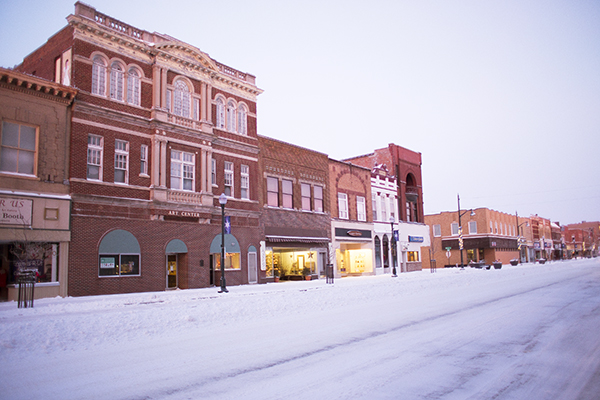 A sign of winter in Albert Lea, city workers left snow in the center of Broadway this morning after the area received 2 1/2 inches of snow overnight.- Colleen Harrison/Albert Lea Tribune

A fast-moving clipper system was swift enough to not leave Albert Lea with much for snowfall. Anywhere from 3 to 7 inches was the prediction, but residents awoke this morning to 2 1/2 inches of the white stuff. 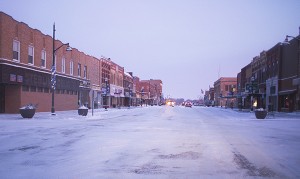 The snowstorm, which has left a 2,000-mile trail of snow so far from British Columbia in Canada to West Virginia, continued its trek eastward, giving the East Coast something to fret.

In Iowa, the storm dumped the snow it had been predicted to dump. More than 7 inches fell in the Des Moines area. About 4 inches fell in Mason City. Northwood had about 3 inches while Lake Mills about 4.

What the storm leaves in its wake are Arctic temperatures. All of Minnesota and North Dakota, most of Iowa and parts of Wisconsin, Illinois, Missouri, Montana and South Dakota were in wind chill warnings. The one affecting Freeborn County and much of southern Minnesota was in effect until 10 a.m. today with another coming 2 to 11 a.m. Wednesday.

The one for today forecast wind chill values at 25 to 30 degrees below zero. At 7:15 a.m. today, the air temperature in Albert Lea was 8 below, the wind was 6 mph from the west and the wind chill was 21 below, according to the automated weather station at the Albert Lea Municipal Airport.

The warning for Wednesday predicts values 35 to 40 degrees below zero due to strong winds. People should bundle up to prevent frostbite and possibly hypothermia. Expect 10 to 20 mph northwest winds with gusts as high as 25 mph, according to the National Weather Service.

The weather service says the high for Thursday is 15 degrees, Friday is zero and Saturday is 12.

Any hope for warmth? Long-term models are calling for a warm spell above freezing starting around Jan. 16. But being a long-term forecast means that could all change. It is winter in Minnesota, after all.