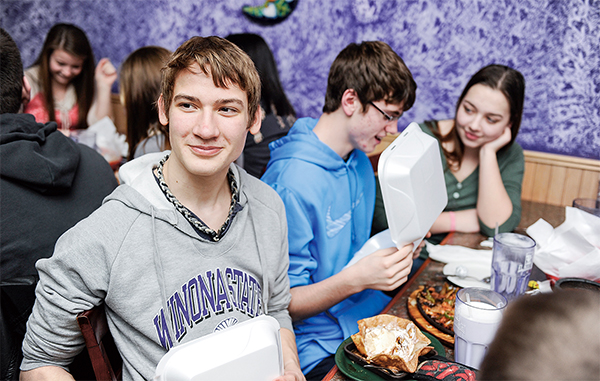 Peter Torkelson, 16, from Southland talks about using the skills he learned in a Spanish class — co-oped with Grand Meadow and Glenville-Emmons — on a trip to El Mariachi Thursday where they had to have all interactions in Spanish. — Eric Johnson/Albert Lea Tribune

AUSTIN — Area students got a taste of Spanish Thursday as their Spanish classes took a trip to El Mariachi. 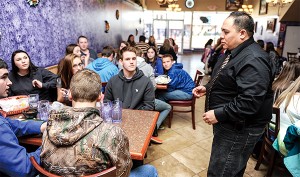 “(We) came here to order in Spanish, it’s like a field trip for us to talk with other people,” Brittanie Winfield, 15, said.

High school students from Grand Meadow, Southland and Glenville-Emmons schools went to Austin’s El Mariachi to order food and help improve and practice their Spanish-speaking skills. Brittanie, from Grand Meadow, said her Spanish could be better, but she can understand most conversations so long as the words were spoken slowly.

Grand Meadow foreign exchange student Nathalia Cortes, 18, from Colombia was not in the Spanish class — which is her native language — but was invited along for the trip. She said it was good for the Spanish students to get out and use the language.

“It’s good for them to practice,” she said. “They need to speak in Spanish.”

Nathalia enjoyed the food as well as listening to her schoolmates speak in her native language.

“It was funny; they were asking me questions, ‘How do I say this, how do I say that?” she laughed. “They did pretty well.”

Spanish teacher Alan Nguyen said this is the first year in a while since Grand Meadow has had an onsite Spanish teacher. Both Spanish one and Spanish two classes were at the restaurant.

“I’m really proud of them because they do a really good job,” Nguyen said. 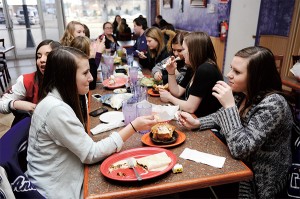 He was excited to see students surprised when they found they could communicate with the waiters and order their own meal. The students have focused on food for about two weeks. Nguyen is onsite at Grand Meadow and on ITV with both Glenville and Southland, which means the students at those sites are taught through a video-chat-like program. Nguyen said it is a good program for students who want to learn another subject but don’t have the option at their own school. This field trip was a good way for the students from the different schools to finally meet each other, and to get out into the real world and put to use what they’ve been learning.

“I’m very proud of the students,” Nguyen said. “I think they’ve done an excellent job. Going around and listening to them, I think they handled themselves pretty well.”

For Katelyn Pickens, 14, of Glenville the language was a bit more of a barrier.

“It was interesting,” she laughed. “I had to point as well.”

She enjoys taking the Spanish class, even though she said there are sometimes technical difficulties with learning from the ITV program.

For Peter Torkelson, 16, from Southland, meeting the students from the other classes was fun.

“This is great,” he said. “Talking to the other schools is great.”

He noted that speaking with the waiters was a different experience than learning in the classroom.

“Out in real life it’s a lot different,” Peter said.