Tigers find success at Rumble on the Red 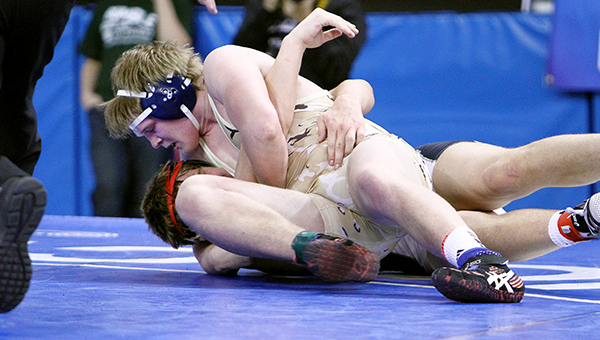 Triston Westerlund of Albert Lea wrestles at 220 pounds Saturday during the three-day Rumble on the Red tournament in Fargo, North Dakota, at the Fargodome. Westerlund was the tournament champion in his weight class. — Pam Nelson/For the Albert Lea Tribune

In a three-day tournament against grapplers from across the nation, the Albert Lea wrestling team produced four place winners and a tournament champion.

The Tigers finished sixth out of 62 teams from six states, and Triston Westerlund went 5-0 to claim the 220-pound title Saturday at the Rumble on the Red tournament at the Fargodome in Fargo, North Dakota.

“It was one of the better finishes we’ve had at the tournament, and it was against some pretty tough competition,” said Albert Lea coach Larry Goodnature.

Westerlund’s road to the title began with a fall over Tristan Wehmas of Spring Lake Park-St. Anthony in the third round of bracket — he received a bye in the first and won by forfeit in the second — and ended with a 4-2 decision over Tristyn Hanson of Lakeville North.

“This is one of the bigger tournaments in the U.S., and it’s a big feather in the cap for Triston,” Goodnature said. “He took command of the match from the very beginning. He was very physical and wrestled a great smart match.”

At 120 pounds, Albert Lea’s Garrett Aldrich was the tournament runner-up. He breezed through the bracket with a first-round bye, a second-round technical fall and a third-round major decision. Aldrich’s quarterfinal and semifinal bouts were both won by two-point decisions. In the championship match, he lost to Jared Franek of West Fargo, North Dakota, by the same score, 4-3, that he did at the Christmas Tournament in Rochester on Dec. 20.

Ignaszewski was unseeded and finished fourth at 113 pounds. After a first-round bye, he beat Jonathan Fraase of Fargo South, North Dakota, with a 7-5 decision but suffered a setback in the third round with a 6-3 loss against Annandale-Maple Lake’s Quinn Youngs. Ignaszewski battled through the consolation bracket with a major decision and four straight decisions, including a 5-4 win over Noah Mirabal of Cleveland, New Mexico, in the consolation semifinal.

Glazier was seeded fifth and took fifth place. The seven bouts he participated in was second only to Ignaszewski, who wrestled in eight. Glazier received a first-round bye and won his next two matches to qualify for the quarterfinals. He lost with a 9-0 major decision against Andrew Nielsen of Plattsmouth, Nebraska, but rebounded with a pair of decisions in the consolation bracket. He lost in the consolation semifinal but won the fifth-place match with an 11-4 decision over Rosemount’s Reuben Cephas.

At 126 pounds, Goodnature said Beau Johnsrud was one win away from placing. In the sixth round of the consolation bracket, he lost to Owatonna’s Tanner Cole with a sudden victory in overtime.

Jesse Hernandez posted a 3-2 record for the Tigers at 132 pounds, and Dereck Samudio, Chris Nelson and Parker Mullenbach went 2-2.

“It was a fun tournament,” Goodnature said. “The teams from out of state are good wrestling programs. It was invitation-only.”

The Albert Lea JV team had nine place winners and two champions to take first place out of 58 teams at same tournament.

“It’s good for our program,” Goodnature said. “We’re going to be tough for the next few years because all of those kids are underclassmen.”

Both wrestlers have varsity experience.

“That’s one nice thing about this year’s team is we have a lot of depth,” Goodnature said. “I’ve got a schedule that’s tough with a lot of matches that gives these kids a chance to get some varsity action.”

Next, the Albert Lea varsity and JV teams will compete at 5:30 p.m. Thursday at Mankato West. 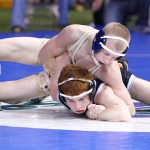 Gavin Ignaszewski of Albert Lea wrestles at 113 pounds at the Rumble on the Red tournament in Fargo, North Dakota. Ignaszewski qualified for the third-place match and took fourth. He was one of four Tigers to place. — Pam Nelson/For the Albert Lea Tribune 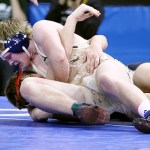 Triston Westerlund of Albert Lea wrestles at 220 pounds Saturday during the three-day Rumble on the Red tournament in Fargo, North Dakota, at the Fargodome. Westerlund was the tournament champion in his weight class. — Pam Nelson/For the Albert Lea Tribune 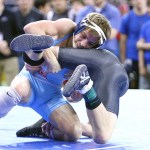 Garrett Aldrich of Albert Lea gets the upper hand in a match at 120 pounds during the Rumble on the Red tournament. Aldrich took second place and went 4-1 at the tourney. — Pam Nelson/For the Albert Lea Tribune 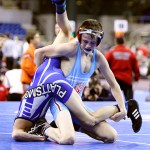 Zach Glazier of Albert Lea wrestles at 106 pounds at the Rumble on the Red tournament. Glazier went 5-2 to capture fifth place. He won the fifth-place match with an 11-4 decision. — Pam Nelson/For the Albert Lea Tribune