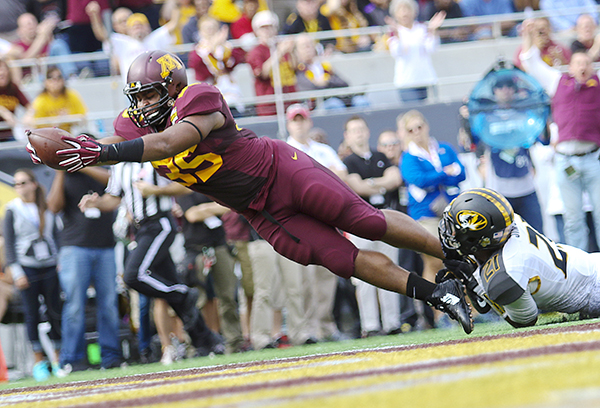 Missouri rumbles past Minnesota in the Citrus Bowl

ORLANDO, Fla. — After a New Year’s Day bowl game drought of more than 50 years, Minnesota coach Jerry Kill was concerned about his team being nervous in its Citrus Bowl matchup with 16th-ranked Missouri.

The Golden Gophers weren’t tight at all, but after a 33-17 loss Thursday that featured several unforced errors, it’s clear there’s still progress to be made to become the program they want to be.

Marcus Murphy ran for 159 yards, Russell Hansbrough added 114 yards and a touchdown and the Tigers took advantage of three Minnesota turnovers to pull away in the second half.

Missouri (11-3) also held one of the nation’s top rushing offenses to 106 yards on its way to winning its third straight bowl game and reaching 11 victories for the fourth time in school history. Minnesota entered the game averaging nearly 225 yards on the ground.

“The bottom line is you can’t turn over the ball and win the turnover. I say that all the time,” Kill said. “The game flipped because of a couple of turnovers.”

The Tigers were led by game MVP Markus Golden, who finished with 10 tackles, a sack and a fumble recovery. It helped Missouri’s offense settle in after some early miscues.

“It’s a blessing to be a part of this team. Just to be out here playing,” Golden said. “One of the best days of my life.”

Kill said he thought his defense got a little tired down the stretch because of extra possessions given to the Tigers’ offense.

“We took advantage of some critical turnovers. It’s 23 (wins) — the best back-to-back seasons in Missouri history,” Tigers coach Gary Pinkel said. “You’re always judged when you have the most adversity and how you respond. And we did.”

Mauk settled down to throw two TD passes after interceptions on the Tigers’ first two possessions.

Minnesota quarterback Mitch Leidner was 21 of 31 for 258 yards and a touchdown, but was under constant pressure in the second half.

The Tigers used an onside kick to open the third quarter to stretch out their halftime lead to 13-7.

The Golden Gophers responded on the ensuing series with a 54-yard touchdown pass from Leidner to tight end Maxx Williams. Williams leaped over cornerback Aarion Penton and stepped over another defender before diving into the end zone.

But Missouri quickly answered, needing just three plays after a muffed Minnesota punt for Mauk to give the Tigers a 19-14 lead on an 18-yard touchdown run.

It tightened to 19-17 by the start of in the fourth quarter before Hansbrough got free and rumbled for his score that put the Tigers’ up by nine with 9:28 to play.

Missouri survived a disastrous offensive start to lead 10-7 at halftime in a game that started with the teams combining for three turnovers in the first 4 minutes.

Missouri’s Mauk opened the game by being picked off by Derrick Wells on the Tigers’ third play from scrimmage. Minnesota would give it right back, though, when Leidner fumbled after being sandwiched in the backfield by defensive ends Markus Golden and Shane Ray.

The Tigers then went just four more plays before Mauk’s second interception, this time in the end zone by Briean Boddy-Calhoun.

The Gophers finally ended the drought on the ensuing series, capping an 11-play, 80-yard drive with a 20-yard touchdown run by Rodrick Williams.

It was part of a bruising first quarter that saw Minnesota gain 76 yards on the ground.

That was flipped in the second quarter, as the Tigers used its own rushing attack to set up the passing game.

First, following a punt, they used their best starting field position of the half to get on the board with Andrew Baggett’s 21-yard field goal.

Mauk then made the best of Missouri’s final possession of the half, finding Bud Sasser for a 25-yard touchdown strike.

In all, the Tigers outgained the Gophers 156-41 in the second quarter.

Pinkel said this win can go a long way for his team.

“We talk about (how) you have to have perseverance and competitive drive. Sounds easy, it’s not,” he said. “Bottom line is you’ve got to make plays. You got to make blocks. We did.”