Verina R. Nelson, 89, of Albert Lea, passed away on Jan. 5, 2015, at St. Marys Hospital in Rochester. A private memorial service will be held at a later date. 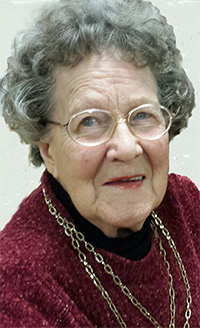 Verina R. Nelson was born on March 7, 1925, in Wentworth, South Dakota. After her marriage to Martin Nelson they farmed near Ramona, South Dakota. They later moved to Springfield where she taught elementary students for 20 plus years.

They moved to Albert Lea in 2009 to be closer to family. While in Albert Lea, they spent their years in St. John’s Lutheran Community. Verina, like Martin, enjoyed her years in the Albert Lea community, especially their frequent rides through the parks and boat rides around Fountain Lake. Her visits with her great-grandsons were a special joy for her. The family would like to publicly extend a huge thank you to all the staff at St. John’s Lutheran Community for the excellent care they provided Verina during her stay there. The staff is dedicated and much appreciated.