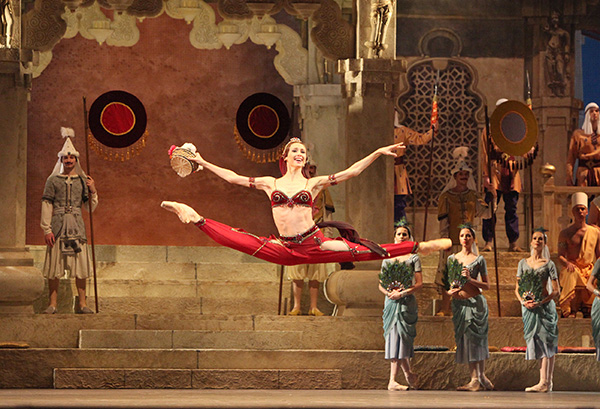 A scene from “La Bayadere” with Svetlana Zakharova as Nikiya. – Provided

A story of secret and impossible love will come to Albert Lea this weekend with Bolshoi Ballet’s “La Bayadére.”

The ballet will be at 5 p.m. Sunday at the Marion Ross Performing Arts Center, 147 N. Broadway.

In “La Bayadére,” the dancer Nikiya and the warrior Solor meet in secret and confess their love to one another. However, the high brahmin is also in love with Nikiya, and he overhears Nikiya and Solor’s promise. The brahmin reveals their love to the rajah, who then declares Solor will marry his daughter Gamzatti.

According to the Bolshoi Ballet Cinema site, “La Bayadére” is one of the key works in classical repertoire, and “a magnificent production.”

The story is set in India and features choreography by Marius Petipa in a new version by Yuri Grigorovich.

Tickets can be purchased at actonbroadway.com.

• A benefit for Gracelyn Andersen will be 5 to 9 p.m. at Dave Syverson Auto Center, 2310 E. Main St. There will be a silent and live auction, entertainment by Grizzly Sound and dinner by Smokin’ Bros Barbecue.

• A Dad’s Belgian waffles fundraiser will be from 9 a.m. to 1 p.m. at First Lutheran Church, 301 W. Clark St. Tickets are $7 for adults, $5 for children 6 to 12 and free for children under 5. All proceeds will be used for programs for people with developmental disabilities.