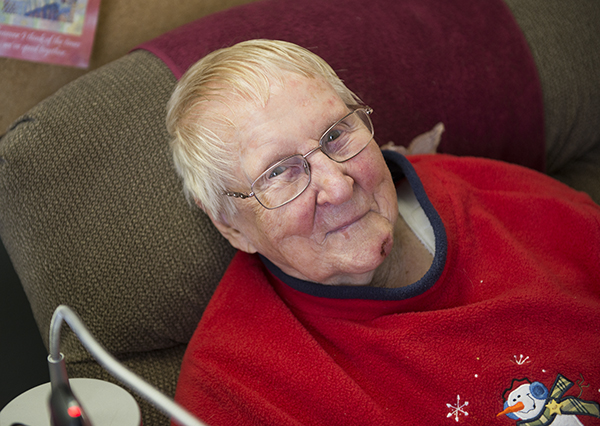 WELLS — Thora Peterson has over a century’s worth of memories.

Peterson, who will be 101 on May 30, lives in Parkview Care Center in Wells. She’s lived there for about 15 months, she said, and before that she lived in Broadway Apartments. Originally from the Hartland area, she moved to Wells about six or seven years ago.

While almost 101, Peterson still has a keen memory, especially for the major moments in her life. 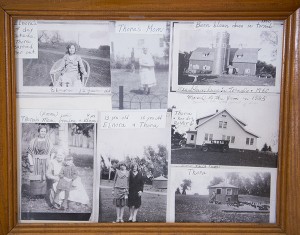 Peterson has a number of photos covering the walls of her room in Parkview. Many of them have labels with names and dates to help keep details straight for her. – Colleen Harrison/Albert Lea Tribune

Growing up with a single father in those times was hard, Peterson said. She didn’t have a mother figure to help teach her about the changes girls and young women go through, and she and her siblings had even more responsibilities around the house to help out their father. She said they had some hired help around the house, and eventually her father married one of the women who had worked for them.

Another memory that stands out for Peterson is when her younger sister, Elenora, was diagnosed with polio when she was 11. She said her sister was outfitted with braces on her legs and couldn’t walk. A nun in the hospital she was confined in said that the best thing for Elenora was exercise, so Peterson and her father helped Elenora stretch and exercise her legs each day until she could again walk on her own.

Peterson can easily recall names of teachers she had in school growing up, and dates and ages for when things happened. She was confirmed at 14 and went to District 10 for schooling through eighth grade. She said she would’ve loved to go to high school, but instead she had to stay on the farm and work to help her father.

Peterson was married for 34 years at one point, until she and her husband, Chris, separated in 1958. They had eight children together: Harold, Darlene, Shirley, Milton, Betty, Robert, Donald and Stevie. Stevie died when he was an infant, and Harold and Darlene are now deceased as well. Milton and Betty both live in Wells and Robert lives in Alden. Shirley lives in Oregon and Donald lives in Big Lake. Peterson said Betty calls her every morning and every night, and Robert visits once a week. Donald has been able to visit her twice since her move to Parkview, as well.

After separating from Chris, Peterson said she moved up to Waseca since she was working there more and more. There she met Jack Larson, who she eventually lived with.

After Larson died a few years ago, Peterson then moved to Wells.

Now, Peterson enjoys the simple things in life. She likes to crochet, sew and knit, and she loves being a grandmother and great-grandmother. She’s especially grateful for Good Shepherd Lutheran Church in Wells sending a reverend out to Parkview for worship services.

When asked what her secret is to aging so well in both body and mind, Peterson said, “Lots of hard work.”

“I remember lots of things,” she said. “I’m so thankful every day for my right mind.”

Family: six grown children who live in Alden, Wells, Big Lake and Oregon. She also has 17 grandchildren and two great-grandchildren.

Occupation: Retired. Peterson used to be a farmer and used to work at Birds Eye corn packing in Waseca.