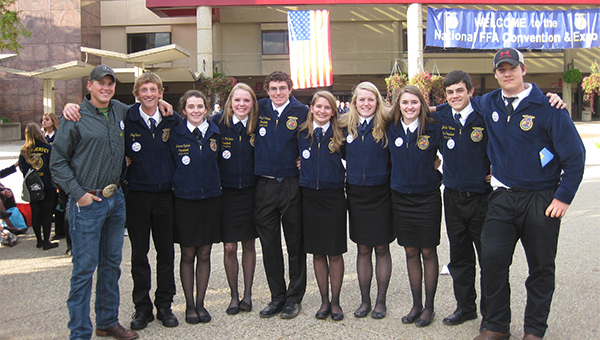 National FFA Week is coming up, and the Albert Lea FFA has plenty to look forward to this year.

Christina Ebeling has been an agriculture teacher and FFA advisor at Albert Lea High School since September. There are 70 FFA members this year, and Ebeling said it’s a “great group of kids.” 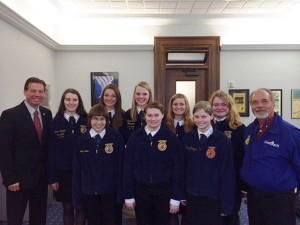 On March 27, 2014, the Albert Lea FFA chapter took eight members to FFA day at the state capitol. Members got to talk with local legislators and representatives about their ties to agriculture. Pictured in the back from from the left are Sen. Dan Sparks, Brianna Opdahl, Madalynn Thostenson, Taylor Willis, Krystal Viktora and Marissa Oakland.Pictured in the front row from the left are Amanda Bera, Lizzy Silva, Ali Hagen and Kim Meyer. – Provided

The FFA is gearing up for FFA Week, and Ebeling said there will be a few dress-up days to support the group. She hopes to have FFA apparel day on Monday and blue and gold day on Friday.

There will be agriculture-related questions throughout the week and there will also be a daily emblem hunt, she said. The student that finds the emblem will win an FFA T-shirt.

There will also be a teacher appreciation breakfast on Friday morning, Ebeling said.

Looking further ahead, there have been a few FFA students who will be competing at the state convention at the end of April.

The students got their pass to go to state through regional career development events, which happen once a month, Ebeling said.

At the state convention there are different workshops the students can participate in, as well as sessions held by state officers. There is also a talent show from members all across the state.

“And lots of fun to be had by all,” Ebeling said.

The national convention is held in October. This past October, 12 FFA students went to the convention in Louisville, Kentucky.

These students participated in sessions such as leadership building and heard from guest speakers, such as Nick Vujicic, a motivational speaker with no arms or legs.

Ebeling said the students also had the chance to tour the Churchill Downs racing track.

The national convention will also be in Louisville this October.

FFA was founded by a group of young farmers in 1928. Its mission is to prepare future generations for the challenges of feeding a growing population. Since the founding members the organization has taught generations that agriculture is more than planting and harvesting — it involves science, business and more.

Today, FFA continues to help the next generation rise up to meet new agricultural challenges by helping members develop their own unique talents and explore their interests in a broad range of career pathways. Members prepare for careers as biologists, chemists, veterinarians, engineers and entrepreneurs.