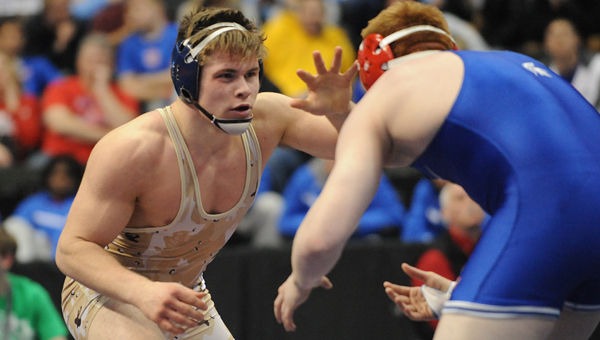 ST. PAUL — Although the Albert Lea wrestling team had a loftier goal in mind, the Tigers battled their way to the Class AA championship match for the second time in five years and finished as the runner-up.

“We’d liked to have won it all, but we can’t hang our heads because second in the state is pretty darned good,” said Albert Lea coach Larry Goodnature. “We made a great run.”

The Tigers started the title match with two falls in the first three bouts to take a 12-4 lead, but Simley went on to win seven of the next eight bouts that included back-to-back one-point decisions at 132 and 138 pounds to defeat Albert Lea 34-22 Thursday evening at the Xcel Energy Center in St. Paul.

Goodnature said the competition was even and his staff figured the favored wrestler was a toss-up in more than half of the matches.

“They have a very balanced team, just like ours, and they were able to win the close ones tonight,” he said.

The Tigers beat the Spartans in five matches. Zach Glazier, a 106-pound eighth grader ranked No. 3 in Class AA, produced his second fall of the state tournament by pinning Simley’s Anthony Dawson in 4:50.

Glazier said he hopes the team can build on its success.

“We just need to keep working, and next season we’ll hopefully get here again,” he said.

A 7-3 decision by Dereck Samudio at 152 cut Albert Lea’s deficit to three points, 18-15. However, the Tigers lost the next three matches, and the team was unable to climb out of the hole with a major decision by Tim Christianson and a decision by Triston Westerlund at 220.

Headed into the contest, both teams had similar resumes. Albert Lea was 35-1 and had fewer losses, but both teams were perfect against Class AA competition. Simley was 28-5 and had three losses against St. Michael-Albertville — a Class AAA team — and a pair of losses against teams from Illinois. Albert Lea’s lone blemish was against St. Michael-Albertville as well. The Tigers lost 47-19 on Jan. 10 during a tournament at St. Cloud Tech, and the Spartans lost 53-10, 45-11 and 50-12.

When Goodnature talked about the season overall he smiled. The journey featured Big Nine Conference and Section 1AA titles.

“I’m happy with our season: 35-2,” he said. “All you can ask of the kids is that every time they step on the mat to give it all they’ve got, and that’s what they did. It was a good season, and I’m proud of the kids.”

The Albert Lea wrestling program has five state titles, and Thursday was the third time Goodnature coached the Tigers to the state championship match, he said. The most recent previous occasion was the 2010-11 season.

The dual season is over, but seven members of Albert Lea’s roster will take the mat at the Class AA individual state tournament today and Saturday. Those who qualified are Glazier, 106; Gavin Ignaszewski, 113; Aldrich, 120; Beau Johnsrud, 126; Devin Nelson, 138; Christianson, 182; and Westerlund, 220.

The Tigers’ ticket was punched for the title match with a 39-21 win over Scott West Thursday afternoon in the state semifinals.

With one-point decisions in the first two weight classes, Scott West took a 6-0 lead. Albert Lea knotted the score 6-6 with a 7-0 decision by Brody Nielsen and a 9-8 decision by Aldrich, but the Panthers took a 10-6 lead with a major decision by David Flynn, the No. 1-ranked wrestler at 132.

To qualify for the state semifinals, the No. 2-seed Tigers beat No. 7-seed Foley 42-12 on Thursday morning.

The Tigers started well and ended the same way with three straight wins. By the time Albert Lea’s Dominick Fadden took the mat at 285 pounds, the Tigers led 39-12. However, Fadden said his mindset stayed the same.

Fadden capped the Tigers’ victory with a 3-2 double overtime win.