Funeral services for Alice B. Liane will be at 11 a.m. Thursday at Trinity Lutheran Church in New Richland. The Revs. Ronald Brey and Paul Andree will officiate. Visitation will be from 4 to 7 p.m. Wednesday at Bonnerup-Friedrich Chapel in New Richland. 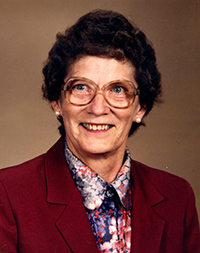 Alice B. (Rhiger) Liane was born Sept. 24, 1925, to Holbeck and Brita (Midlang) Rhiger in Albert Lea. She was raised in Albert Lea and graduated from Albert Lea High School in 1943.

She attended Naeve Hospital School of Nursing, graduating in 1947. She was in the Naeve Alumni & Nurses Club.

Alice worked at the Naeve Hospital OB/GYN floor for many years. She also worked as a nurse at Waseca Hospital and finished her nursing career at New Richland Care Center.

She is preceded in death by husband, Wendell; parents Holbeck and Brita; and brothers Selmer “Sam”, Arthur, Stanley and Harold.