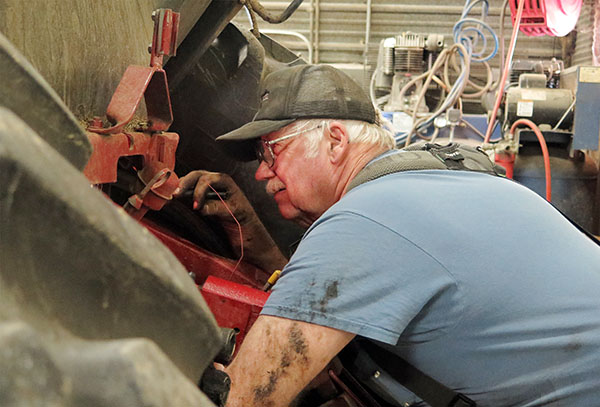 Duane Ommodt works on a tractor in a shop on his farm near St. James in southern Minnesota. Ommodt says low grain prices means this year probably will be a money loser for most farmers. – Mark Steil/MPR News

ST. JAMES — Corn is Minnesota’s biggest cash crop, and in recent years it has delivered big returns to the state’s farmers.

But this year, most corn farmers are expected to lose money. That’s causing a lot of concern among farmers as they negotiate spring planting loans with lenders.

“It’s a bad situation here this year,” said Duane Ommodt, who farms in Watonwan County southwest of Mankato. “Virtually everybody is going to lose money. It’s a bad deal.”

Ommodt said some farmers could lose as much as $300 on each acre of corn they plant. If that happens, even medium-sized Minnesota farms could see the revenue they earn from selling the crop fall more than $100,000 short of what it cost to plant the corn.

The problem is unprofitable crop prices. Several years ago, corn prices were as high as $8 a bushel, and soybeans nearly $18 a bushel.

But today, a bushel of corn sells for less than $4 and soybeans less than $10, said David Bau with the University of Minnesota extension.

“Both prices are losing propositions today on the farming outlook,” Bau said.

As spring planting looms, the gloomy picture is a problem for farmers and lenders alike.

“(They want) to make sure it’s a necessity and not a convenience,” Bhend said. “To try and keep their cost of production as reasonable as possible, without reducing yields.”

Bhend said many farmers hope to cut expenses by negotiating lower land rents. Some have been successful, but the reductions have been fairly small, mostly under 10 percent, he said.

Among the factors keeping rent costs high are land costs. Despite reduced farm profits last year, a University of Minnesota study shows that through the end of last September, median farmland prices across the state increased about 5 percent over the previous year.

In part, Bhend said, that owes to the fact that some sectors of the farm economy have prospered.

“The livestock industry has been very, very good in the past two years,” Bhend said. “And if there’s been a parcel of ground that’s come up for sale, amongst a group of livestock producers … we’ve actually seen guys bid very aggressively.”

Just when crop farmers will have another profitable harvest is uncertain.

Bhend expects most will survive this year’s low corn and soybean prices, cushioned from disaster by the big profits they earned during a run of record income years that ended in 2012. He said most used the extra cash to pay down debt.

During a down economic year like the one farmers are facing now, Bhend said, that’s equity they can tap.

If grain prices stay low into next year, some farmers will have to make difficult decisions.

Ommodt, the St. James farmer, holds out hope that he may at least break even because some of his costs, like land rent, are lower than most other farmers. He’s also fortunate that his yields generally are higher than most of his neighbors.

At 64, he may not farm another year if he doesn’t at least break even this year.

Breaking even, Ommodt said, is not good news, since it doesn’t provide money for living expenses.

“A guy should eat once in a while,” he said.