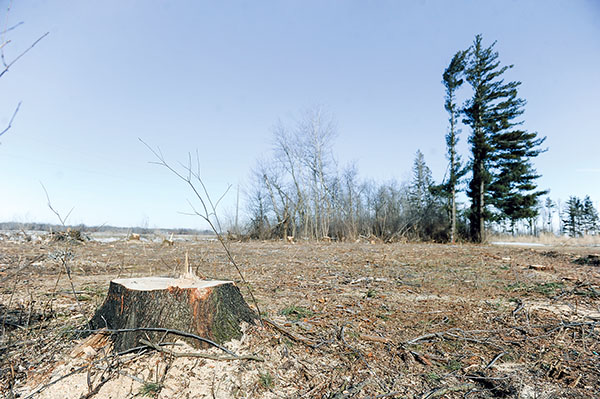 Land has been cleared at the Jay C. Hormel Nature Center as progress begins to make way for the new visitors center and the moving of a maintenance shed. – Eric Johnson/Albert Lea Tribune

AUSTIN — The Jay C. Hormel Nature Center is missing some trees, but it’s all part of the bigger picture.

Nature center organizers have started the process of building the new $7 million interpretive center, which will take the place of the current visitors center. The new building will be placed north of the current maintenance building, which will be moved in the fall to where the current entrance is. Director/naturalist Larry Dolphin said the process will take more than two years to complete, but one big goal this year is to move the maintenance shop to a new location. Organizers started removing trees Jan. 1, and while Dolphin anticipated about 50 trees would be removed together, along with some native and non-native shrubs. The Ruby Rupner Auditorium will remain where it is.

“We’re moving forward step-by-step and our deadline for the building itself is to break ground in spring of 2016,” Dolphin said.

The project was announced last year in part to add more room to the facility and in part because the current interpretive center is in the flight path for the Austin Municipal Airport. The project is slated to be finished in fall of 2017. Although the nature center received a $5 million grant from the Hormel Foundation for the $7 million project, Dolphin said they are still trying to raise $780,000 for educational exhibits and displays, as they have about $320,000 for the displays currently. The current plan calls for 15 exhibits, which could include displays on birds of prey, creatures of the night, prairie/soil and plants, endangered species, and an early childhood room with several hands-on activities.

Dolphin said they hope to select an exhibit display designer in March or April, and people can make donations to the displays if they want. The architect for the interpretive center is already on board.

The interpretive center will be 15,000 square feet — three times the size of the current building — and it will be built to northeast of the maintenance building. A big part of the design will feature renewable energy sources for the building, including 50 or 100 kilowatts of solar-power, water collection to use for flushing toilets and such, and possibly electric car chargers.

“It’s wonderful,” Dolphin said. “It’s a great opportunity, and we’ll have exhibit displays, and the whole solar energy aspect of it — we’re really excited about that aspect of it.”

The hope is the operating costs will be a lot less than the visitor center’s current use to make it as efficient a building as possible. Dolphin noted the way things are set up now is hard on the planet, people and wildlife, and he said the less people depend on oil, gas and other non-renewable energy sources, the better.

“The whole idea of course is to have this building be a really great example for private as well as (the) public on how we really need to be in the future sustainably,” Dolphin said.

“Going more towards the renewable end of it makes so much sense, not only now but going into the future,” he added.

Dolphin noted they hope the efficiency will help with taxpayers dollars as well as the planet. The current visitor center, which was built in 1975, will be taken down after everything has been moved inside the new building in late 2017. Ruby Rupner Auditorium will remain untouched. Dolphin said this is the biggest project he has been involved in, and he is excited to see it through.