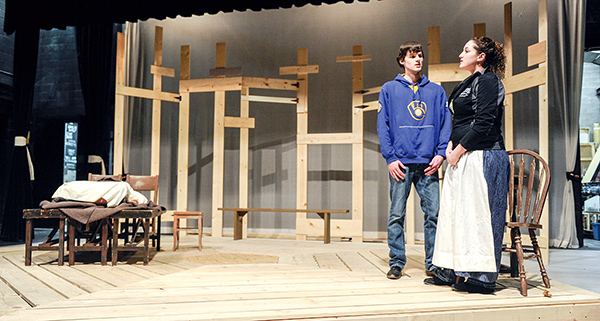 AUSTIN — Sometimes, classics reverberate throughout the ages and feel just as fresh as they did when they were created. 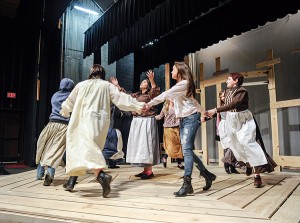 The cast of “The Crucible” rehearses a scene for the upcoming Riverland presentation. – Eric Johnson/Albert Lea Tribune

That’s the case with many of renowned playwright Arthur Miller’s productions, but it was “The Crucible” that stuck out to Riverland Community College Director Lindsey Duoos Williams.

“When I read through this play, I asked myself, ‘Is this something that still resonates today?’” Williams said. “Frighteningly enough, yes it absolutely does.”

Riverland started performing Miller’s classic drama Wednesday night and will continue each night through Sunday. Winner of the 1953 Tony Award for Best Play, “The Crucible” is a classic of the American stage.

An exciting drama about the Puritan purge of witchcraft in old Salem, the play was Miller’s response to the McCarthy “witch hunts” of suspected communists in the 1950s, of which Miller himself was a target.

“It had this real relevance in the 1950s,” Williams said.

It’s that relevance that Williams thought was appropriate to showcase once again. “The Crucible” holds many themes, but it’s famous for illustrating the perils of so-called “group think” and the way society allows itself to be ruled through fear. Williams and cast see the way people can easily jump to conclusions on the Internet based on the way information is presented. As for fear?

“That’s something I think we’ve all seen, particularly in our news media today, is how fear is being used,” she said.

Though the play will still be set in 1692, the cast will find ways to show the audience just how relevant “The Crucible” can be to modern times, according to Williams.

“While the story and the characters will stay rooted in the historical time period, there are other ways we can tell the story to the audience throughout the play,” she said.

“It’s heavy drama, but it’s such good drama,” Williams said. “This is a really exciting play, you’re hooked until the end.”