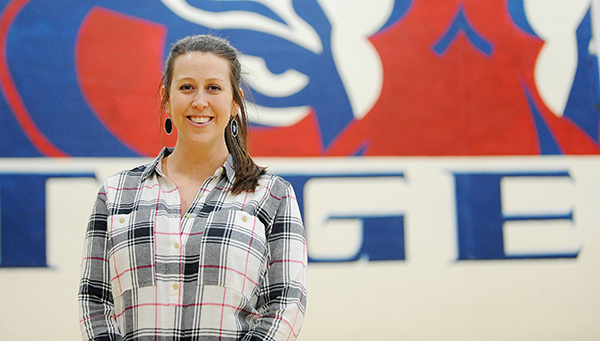 Albert Lea dance coach Kelsey Routh stands in the gym at Albert Lea High School. Routh led a group of 50 participants, which was the most in school history. – Micah Bader/Albert Lea Tribune

As a senior at Albert Lea High School in 2002, Kelsey Routh was a captain of the dance team. 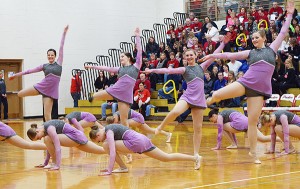 The Albert Lea dance team competes Feb. 7 in the jazz division during the Section 1AA tournament at Austin. – Provided

Thirteen years later, she became the team’s head coach and led the Tigers to their highest jazz-division finish in school history at the Section 1AA tournament with a squad of 50 dancers, the largest group in the history of the program.

“Dance team participation levels have grown dramatically, and I only see them increasing over the next few years,” said Albert Lea athletic director Afton Wacholz. “Kelsey is very well respected by her athletes and their families.”

Along with leading the varsity team, Routh and assistant coaches Megan Kromminga and Jennifer Anderson coached the JV team in its second year of existence.

“As they grow as a feeder program, they’re going to keep making our team more and more successful,” Routh said. 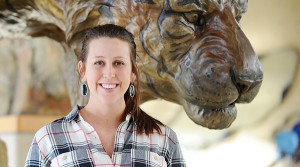 Albert Lea dance coach Kelsey Routh has lead the Tigers to their best finish in the jazz division at the Section 1AA tournament in school history. – Micah Bader/Albert Lea Tribune

Her dancing career began at age 3 as a pupil at Joyce Matthies Dance Centre, she said.

In high school, she was an assistant for Aimee Struck with Albert Lea’s Just For Kix program and provided private studio training with Allison Ciota along with leading the Tigers’ high school team.

Between her freshman and sophomore years, Routh said the dance team was recognized as a school sport by the Minnesota State High School League through Title IX.

“When I was a freshman, everyone went to state, and there wasn’t a section tournament,” she said. “It was more like a club than a sport like it is now.”

While she was an undergraduate student, she coached cheerleading for Maple Grove High School and was the head instructor for the Richfield-Bloomington Just For Kix program, she said. 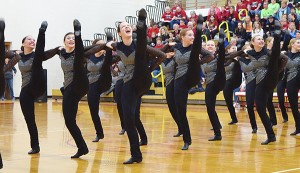 The Albert Lea dance team competes in the high-kick division during the Section 1AA tournament at Austin. – Provided

Routh said her favorite part of coaching is interacting with the kids.

“We’ve got some great athletes and great characters,” she said.

Albert Lea competed in three invitationals this season along with a dance showcase, the Big Nine Conference meet and the section tournament.

“Kelsey has worked diligently to set up high-quality competitions for her dancers to participate in throughout the regular season,” Wacholz said. “Her efforts — along with the dance team boosters — to hold their first annual dance team showcase were a great indication of her passion to provide our student athletes with a home crowd performance experience.”

About 10 to 15 schools host invitationals each weekend, Routh said.

“We go with teams that we know will be competitive and challenge us,” she said.

At the Big Nine Conference meet, the Tigers finished third. Albert Lea closed out the season at the 14-team section meet with a sixth-place finish in the jazz division and fifth place in the high-kick division. The top three section finishers qualify for state.

“I am extremely proud of this team and the staff and look forward to seeing them grow as a program,” Wacholz said.