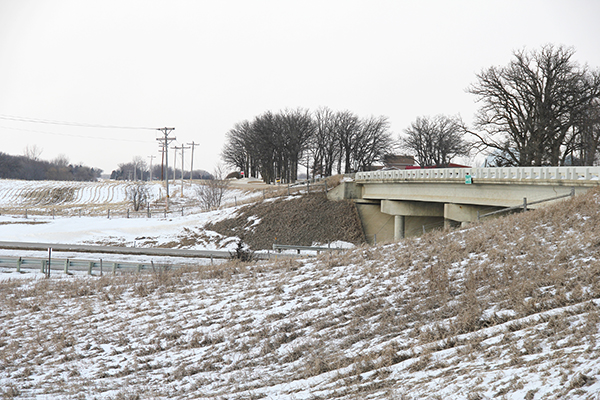 This bridge on Freeborn County Road 92 over Interstate 90 is one of the projects listed in Gov. Mark Dayton’s transportation proposal released on Tuesday. – Sarah Stultz/Albert Lea Tribune

About a dozen Freeborn County projects in governor’s proposal

His detailed roster — which included about a dozen projects in Freeborn County — was designed to highlight what transportation planners say is a $6 billion need over the next decade and to put pressure on lawmakers by showing their constituents what the new money would buy. It ran counter to tradition by Minnesota politicians to avoid inserting specific projects in the legislative funding debate under the principle that Department of Transportation experts are best left to make professional judgments.

“If they don’t have the money, they can’t do the projects,” Dayton said. “I don’t know what’s political about that. That’s just the real world.”

The projects in Freeborn County were the following:

• Bridge on Minnesota Highway 109 over Interstate 90

• Bridge on U.S. Highway 65 northbound over an Albert Lea street

Dayton’s transportation commissioner, Charlie Zelle, said every project has had at least some level of professional analysis and many have undergone engineering reviews already. He said the extra money would give his agency the ability to rehabilitate roads for the long run rather than patching them short term.

Still, House Transportation Finance Committee Chairman Tim Kelly, R-Red Wing, said it struck him as politically driven earmarking. Kelly said it had a feel of “going out to specific areas and holding them hostage” by linking specific projects to passage of a big funding package.

So far, Republicans have outlined a $750 million plan that diverts some dollars from a projected $1 billion budget surplus and reshuffles other money the transportation department now gets. Kelly said a more-comprehensive proposal is in the works.

The list distributed by Dayton’s administration includes projects as small as a half-mile rework of Highway 32 in Greenbush in far northwestern Minnesota to a 30-mile stretch of Highway 2 between Cass and Itasca counties. There also are short but expensive upgrades in the Twin Cities, such as adding more lanes and reconstructing bridges along Interstate 94 between Minneapolis and St. Paul.

All told, the list covers 2,200 lane miles and 330 bridges that would be addressed.

But all of it is heavily contingent on the size of a spending package that lawmakers approve. Dayton’s bid for a new wholesale tax on gasoline — starting at 16 cents per gallon and rising annually based on the average cost of gas — has received a lukewarm reception, particularly from Republicans. Dayton’s plan separately contains a half-percent increase in the seven-county metropolitan area for mass transit upgrades.

Dayton was headed to Mankato today to continue pressing his case.