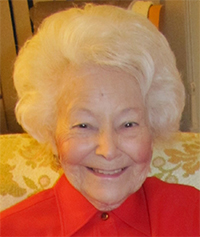 Dorothy was born in Chicago to Elmer and Inez (Olson) Johnson. She lost her mother to tuberculosis when she was 6 years old and was sent to a boarding school in Wisconsin with her brother, Robert, for several years. Her father remarried a woman from Manchester when he was in Albert Lea installing the first sound system in the Broadway Theater. After that, they moved from Milwaukee to a farm outside Waubeka, Wisconsin. Dorothy always said she was a farm girl at heart, even though she was raised in big cities.

It was in this small village where she met her future husband, Clarence John Schroeder, in 1941. He joined the U.S. Army Air Corps in April 1943. Intent upon marrying her, the family recently discovered postcards that he sent to her every day, apparently concerned that she might not wait for him. When she did not always respond in kind, he expressed his disappointment. His persistence was rewarded when Dorothy agreed to marry him. She said she would never be a furlough bride or get married in the winter. They were married in her farm home Jan. 16, 1944, while he was home on leave.

After they were married she joined Clarence at Barksdale Field in Shreveport, Lousiana, where he was completing flight school to fly B-26s.When Clarence left to go overseas, Dorothy went to live with relatives in Fort Worth, Texas, where she worked as an inspector for military contractor Consolidated Vultee.

After the war they moved to Albert Lea in 1946 and rented a four-room house on the north side. In 1951 they built their lifetime home on Willamor Road and had four children, all five years apart (as Dorothy always said.)Dorothy was a homemaker and focused all her efforts on raising their children, assuring that all had music lessons and participated in enrichment programs such as Summer Science.  Dorothy loved going on picnics, hiking and being in the outdoors. Clarence enjoyed sleeping on the picnic table.

In recent years she was able to climb down the staircase at Minneopa Falls, go zip lining in Costa Rica, take a helicopter into a volcano in Hawaii and enjoy sailing with her daughter and son-in-law along the east coast. As all who know her, she had a passion for music and loved dancing and singing. For many years she and Clarence enjoyed dancing with the Star Dusters. Even during her last days she would sing for hours in her recliner and tap her feet to the music. She advanced her own education by completing her GED.

During their retirement years she and Clarence enjoyed traveling to every state of the union, including Hawaii and Alaska.

Dorothy was preceded in death by her parents; brother, Robert Johnson; and husband of 70 years, Clarence.

Her family will miss her ready laugh, her clever sense of humor, her kindness and wonder of nature.

Although Dorothy’s memory faded over the years, she was able to remain in her home until September because of the loving care provided by Clarence and her “helpers”  Ronda Tuveson, Danielle Bure, Tami Johnson and Perian Buringa. In addition, Kathy Knutson and Julia Bohonek were companions during her stay at Hidden Creek.

The family also wishes to acknowledge the compassionate care provided by the staff at Hidden Creek Estates, and most recently at Good Samaritan Recovery Trail.

Visitation will be from 2 to 2:30 p.m. Monday at the chapel at Good Samaritan Society, 75507 240th St. in Albert Lea. A memorial service will immediately follow. Guests are invited to join the family for refreshments and reminiscing after the service.