Memorial services for Douglas D. Guenther of Albert Lea, will be held at 11 a.m. Feb. 16 at the Bonnerup Funeral Service in Albert Lea. The Rev. Richard Spande will officiate. Visitation will be held Sunday from 5 to 7 p.m. at the funeral home. 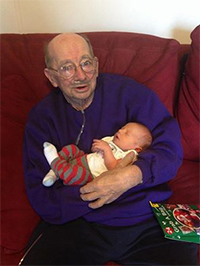 Doug was born May 12, 1938, in Albert Lea, the son of Lincoln and Thelma (Pierson) Guenther. He graduated from Alden Conger High School in 1956 where he met his future wife Gwendolyn Manuel. They were married on June 15, 1957. Their love lasted over 56 years, and they had four children. Doug continued his education in college in Brookings, South Dakota, and the at University of Minnesota.

Over the years Douglas worked for Hoffman Taft in Springfield, Inter Plastics in St. Paul and Cook Paint in Kansas City, Missouri. He also helped his uncle on the family farm. Together Doug and Gwen owned Sharps Resort in Branson, Missouri. Doug was also a member of the Eagles Club in Albert Lea, Cape Fair in Missouri, and Albert Lea Moose Club, and played saxophone in the Blue Banners Band. Some other activities he enjoyed include traveling, bird watching, gardening, taking care of his lawn and most of all spending time with his family and grandchildren.