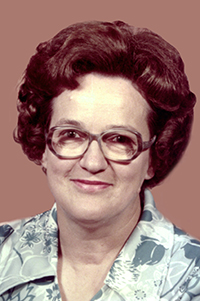 Erlis was born Feb. 1, 1929, in Kiester to Emma (Kleinschrodt) and Harold Katzung.

On April 24, 1948, Erlis married Joseph Sipple at St. Theodore Catholic Church in Albert Lea. They made their home here and raised six children together. Erlis held many jobs over the years including Standard Truck Stop, Clothing Care Laundry and her own cake decorating business.

Erlis was an active member at St. Theodore, helping with the ladies aid. She kept busy with gardening clubs and card clubs. Many of Erlis’ favorite hobbies included gardening and canning vegetables, crafts, needlepoint, sewing, bird watching and decorating cakes. She was a lover of animals and traveling all over, taking many sightseeing bus trips. Erlis enjoyed camping, going to the theater to see plays and getting her hair done. She was a fun and caring individual who will be greatly missed.