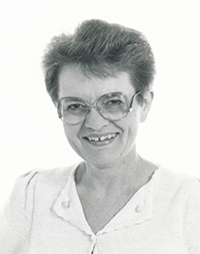 Funeral services will be at 11 a.m. Monday at the Parker Kohl Funeral Home in Faribault, with the Rev. Lee Freshour officiating. Interment will be at the Meadow Ridge Memorial Park in Faribault.

Visitation will be from 9 to 11 a.m. Monday at the funeral home.

Esther Joan was born on Aug. 9, 1938, in rural St. Ansgar, Iowa, to Joseph and Mary (Crooks) Beyer. After high school, Esther attended Mankato Commercial College to be a legal secretary. She then worked for an attorney in Mapleview.

She was married to Robert Kanzenbach on Oct. 11, 1959. They moved to Faribault where Esther, in addition to being a homemaker for her family, worked as a bookkeeper for C.J.’s in Faribault and George Wickstrom’s Northwestern Mutual Insurance agency. Other jobs included the Nelson’s bakery and a machinist at K&G Manufacturing. She worked in the office at Wilson’s before providing tailoring services to individuals and businesses, along with wedding cakes and dresses for many. Her last employment was with the State Bank of Faribault. Esther then was able to spend more time with her passion for painting, which included watercolors and batiking. She enjoyed painting Ukrainian eggs and teaching others the craft, along with displaying her craft at art shows.

Esther was a member of the Faribault and Albert Lea Art Centers. Besides art, she enjoyed gardening and canning and was very musically gifted, playing many different instruments. She and Rob retired to Ault, Colorado, for six years. He preceded her in death on Nov. 27, 2005.

She was preceded in death by her husband, Robert; parents; son, Frederick Kanzenbach; and brother, Richard Beyer.