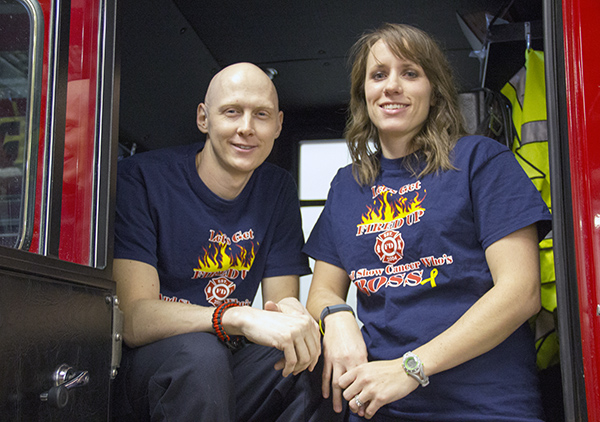 A benefit is slated for 3 to 8 p.m. Saturday at the Albert Lea Moose Lodge for Albert Leans Brett and Danielle Boss. Brett, who has been on the Albert Lea Fire Department for 11 years, is suffering from Ewing Sarcoma. — Sarah Stultz/Albert Lea Tribune

Benefit for family this weekend at Moose Lodge

It started off with pain in his hip last summer.

Albert Lea firefighter Brett Boss said the pain was so bad that it would keep him up at night.

After multiple appointments with his family doctor at Mayo Clinic Health System in Albert Lea, a chiropractor and others without any resolution, he went to a rheumatologist Dec. 5 in Rochester. The rheumatologist ordered blood work looking for an infection and a week later conducted more tests, including a biopsy and a CT scan.

The CT scan discovered fluid around the pleural cavity of his left lung, tumors close to his heart and a mass close to the spine by his pelvis.

After testing tissue from the mass, doctors on Dec. 18 diagnosed Brett, 31, with Ewing’s sarcoma.

“I was more in shock than anything,” said Brett, who has been with the Albert Lea Fire Department for almost 11 years. “I didn’t expect to get cancer.”

Ewing’s sarcoma is a bone cancer that typically affects children and adolescents and rarely occurs in adults over 30. Because it is rare in adults Brett’s age, there is not as much research about it as there is with other cancers.

Brett’s wife, Danielle, who is an account manager at Alliance Benefit Group, said doctors told her husband he would have to begin aggressive chemotherapy treatment for a total of 29 weeks, including 14 rounds of chemotherapy.

The treatments began the next day.

Brett undergoes two types of treatment. During the first type he is hospitalized for three days in Rochester and receives medication day in and day out.

For the second type, he goes into the hospital five days in a row and receives medication four hours each day.

The first type is done in Rochester, but luckily, Danielle said, he is able to do the second type in Albert Lea.

Brett just completed his fifth round of treatments and will start the sixth one next week.

Brett said though most of the pain is gone, he is feeling the effects of the chemotherapy and is sometimes tired and nauseated.

The treatments appear to be helping thus far. Brett said the tumors and fluid in his lungs are almost completely gone, and the mass has shrunk on his pelvis.

In the meantime, he is on light duty on the green shift with the Fire Department, but he is not doing any emergency calls such as fighting fires or extrication at crash scenes.

Danielle credited her husband’s attitude even as he is facing the challenge of cancer.

“He’s been really amazing with his attitude,” she said. “It’d be so easy for him to just give up, but he always has such a good attitude. That really helps me and the kids do it all.”

Brett and Danielle are the parents of two children, Jaelyn, 7, and Aiden, 5.

The couple thanked family, friends and others in the community who have helped them care for the children, who have brought meals or helped in some other way.

“It’s been amazing and overwhelming sometimes,” she said.

There will be a benefit in their honor on Saturday from 3 to 8 p.m. at the Albert Lea Moose Lodge.

There will be a live and silent auction, a meal and a bake sale.

T-shirts stating “Let’s get fired up and show cancer who’s boss” will be for sale.

People wearing the shirts have been popping up on social media all over the community.

Danielle said people will be coming from as far away as Kansas, Illinois and North Dakota for the benefit.

What: Benefit for Brett and Danielle Boss