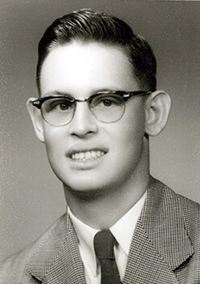 Gerald D. Pederson was born Feb. 25, 1939, in Lake Mills to parents Leslie and Helen (Westendorf) Pederson. He graduated from Scarville High School in 1958.

Gerald enjoyed meeting and talking to people and had many friends around Mason City.

He was an avid sports enthusiast and statistician with interests in baseball, basketball and football. He kept up on local high school, college and professional sports and could easily quote records of teams and players. He would often write to colleges to get information about upcoming seasons and new players. Growing up with a physical disability, he could not play competitive sports, so he often told friends and family members who competed that they were his heroes.

To those who knew Gerald, he was their hero and will be sadly missed.

He was preceded in death by his father, Leslie M. Pederson.

Memorials may be directed to the Bethel Lutheran Church Cemetery fund.