Memorial services for Harriet H. Anderson, 87, will be at 2 p.m. Saturday at Bayview/Freeborn Funeral Chapel. The Rev. Judy Converse will officiate. Interment will be at a later date at Hillcrest Cemetery. Visitation will be one hour prior to the service at the funeral home. Online condolences are welcome at www.bayviewfuneral.com. 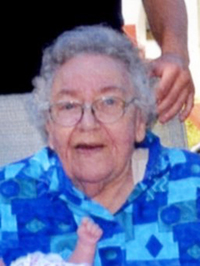 Harriet H. (Hintz) Anderson was born Feb. 10, 1927, to Walter A. and Margaret E. (Buendorf) Hintz. She grew up in Kiester Township near Walters and Mansfield.

Harriet worked at a variety of occupations over the years but retired from cooking at Naeve Hospital in Albert Lea. How she made it to work in the winter, after Omer died, is still a puzzle. Apparently no snow drift was too deep at 4 a.m. The Naeve staff needed those extra cookies and sweet rolls. Harriet also had special recipes for baked beans and potato salad for extended family occasions.  She was pleased to be the German girl that knew how to make excellent Norwegian lefse and even lutefisk!

Omer and Harriet raised three sons and were thrilled when grandchildren were born. Harriet loved to indulge the grandchildren and then keep them a bit longer to spoil them just a bit more. Their driving lessons commenced early and all survived wiser and more excited for the experience. Harriet used that valuable practice to take great-grandchild indulgence to new heights. They were all extra rays of sunshine in her life and simply did not live near enough to satisfy her.

Harriet moved to Lutheran Retirement Home May 27, 2011, and came to regard the many people who make it what it is as extended family. She was grateful for their kind efforts to make her life comfortable.

In lieu of flowers memorials are preferred to Lutheran Retirement Home in Northwood.