Funeral services for Howard (Bud) Richard Sweet, 99, of Albert Lea will be at 1:30 p.m. Friday at Bayview/Freeborn Funeral Chapel. The Rev. Tom Biatek will officiate. Interment will be at the Alden Cemetery.  Military honors will be accorded by the Alden  American Legion and members of the Freeborn County veterans organization. Visitation will be one hour prior to the service at the funeral home. Online condolences are welcome at www.bayviewfuneral.com. 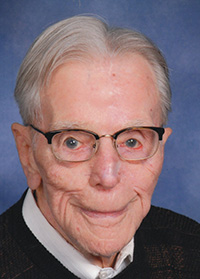 Howard Richard Sweet was born July 31, 1915, in Albert Lea, the son of Lester and Carrie (Anderson) Sweet. Howard grew up in rural Alden until he was 10, and then moved to town with his family. He was a graduate of Alden High School, class of 1934. Howard served his country in the United States Navy during World War II and was stationed in the Aleutian Islands.

On Feb. 12, 1941, Howard was united in marriage to Maxine Schaudt in Clarion, Iowa. Howard worked as a rural mail carrier for the U.S. Postal Service. He was a member of the United Methodist Church in Albert Lea, the Alden  American Legion, Rural Letter Carrier Association and a past member of the Elks and the Grapevine Twist. Together, Howard and Maxine enjoyed square dancing. He also enjoyed playing cards, bowling and golfing.

Survivors include his daughter-in-law, Nancy Sweet; sister-in-law, Leona Sauer; and many nieces and nephews.

Howard was preceded in death by his parents; wife, Maxine; son, Bradley; and sister, Helen Nelson.