Mary M. Mensing, 63, of Blue Earth died Tuesday, Feb. 10, 2015, at St. Marys Hospital in Rochester. A Mass of Christian burial will be Tuesday at 10:30 a.m. at SS Peter and Paul Catholic Church in Blue Earth with the Rev. Peter Klein officiating. 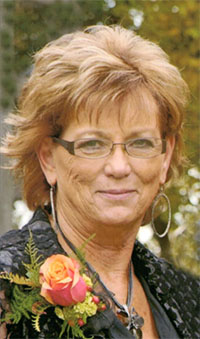 Burial will be in Calvary Cemetery in Blue Earth. Visitation time will be from 5 to 7 p.m. Monday at Patton Funeral Home & Cremation Service, 400 E. 14th St., Blue Earth, and one hour prior to services at the church. Web tributes may be left at www.pattonfh.com. Expressions of sympathy are preferred in the form of donation to United Hospital Home Health & Hospice.

Mary was born March 16, 1951, in Hampton, Iowa, the daughter of William and Marie (Gallagher) Vosler. She was raised in Albert Lea where she was a 1969 graduate of Albert Lea High School. Following school she moved to California where she worked at a doctor’s office. A few years later she moved to Blue Earth to be with her ailing grandmother. She soon met and married Marcus J. Mensing on Aug. 26, 1978, at SS Peter and Paul Catholic Church in Blue Earth.

Mary was a homemaker and had worked at Blue Earth Valley Eye Clinic for a few years. She also taught faith formation at SS Peter and Paul Catholic Church. Mary had most recently worked as a paraprofessional at the Blue Earth Elementary School. Mary was great cook, cleaner and organizer. She was an excellent caretaker for her friends and family and greatly enjoyed the time she spent with her husband, children and especially babysitting her greatest love, granddaughter Zoa.

She was preceded in death by her husband, Mark J. Mensing, in July 2014.