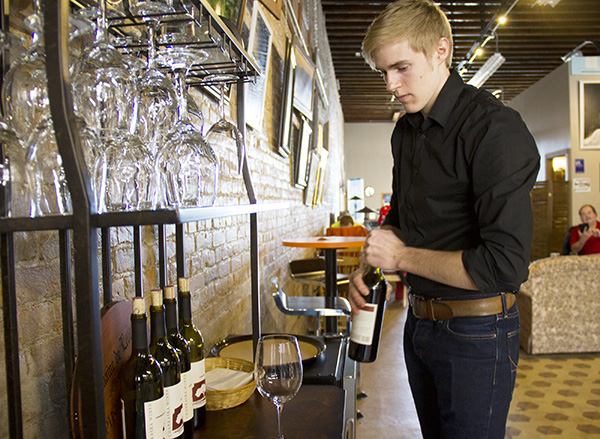 That’s the message Prairie Wind Coffee co-owner Patrick Hanson wants the community to know about his family’s coffee shop and restaurant, slated to reopen later this month under a new name. 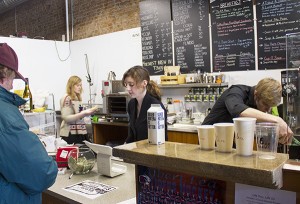 Patrick Hanson, right, his wife, Joy, center, and his sister, Chloe, work at Prairie Wind Coffee on Friday. The coffee shop is expanding some of its offerings and is changing its name later this month. – Sarah Stultz/Albert Lea Tribune

The popular community gathering place, at 211 S. Broadway, will have a grand reopening the week of Feb. 16 through 21, to celebrate going in a new direction, said Hanson, who is also the manager.

The company will then be known as The Interchange Wine & Coffee Bistro.

Hanson said he hopes The Interchange can be a place where people can come and exchange in conversation.

As Prairie Wind offered in the past, The Interchange will have True Stone Coffee out of St. Paul.

It will also serve Chankaska Wines from a winery in Mankato and will add more in the future, Hanson said. Added to that will be craft beers from Minnesota breweries and other breweries around the country. 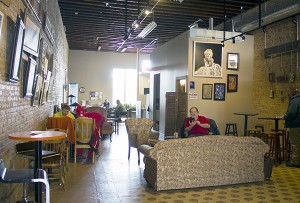 New track lighting was recently installed at Prairie Wind Coffee to help with the atmosphere inside the shop. – Sarah Stultz/Albert Lea Tribune

The business has added several entrées and desserts and will expand its menu of appetizers.

Hanson said that includes a cheese and cracker plate, a spinach and artichoke dip and a gourmet flatbread pizza.

“We try to do some classic things, and then we try some new things,” he said. “We’re all about improving — just over time.”

Hanson said he started working at the coffee shop in March 2013 and in November of that year, he and his mother Lisa Hanson purchased Prairie Wind Coffee from former owner Kirk Foley. The family, which runs the shop, is also known for its ownership of A-Best Sew & Vac on East Main Street.

In addition to its options for food and drink, the family has made several other improvements at the restaurant.

Just a few weeks ago, they implemented new track lighting over a portion of the building.

The Interchange will continue its open mic nights and its showcase of work by local artists. Live music will be offered Feb. 19 through 21.

It is slated to become the first designated Blue Zones restaurant on Feb. 26.