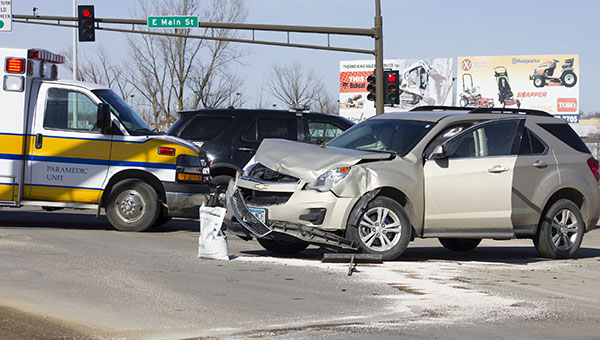 The driver of this vehicle was injured Wednesday afternoon after a two-car collision at the intersection of East Main Street and Blake Avenue. — Sarah Stultz/Albert Lea Tribune

A 34-year-old Austin woman was injured Wednesday afternoon after a broadside collision at the intersection of East Main Street and Blake Avenue in Albert Lea.

Police stated Daneka Lyn Thomas was transported by ambulance to Mayo Clinic Health System in Albert Lea after the crash. Her injuries were deemed not life-threatening.

Deyoung and his passenger, Shirley Deyoung, 79, were not injured, though the Albert Lea Fire Department had to use the Jaws of Life to get the passenger door open.

Everett Deyoung was cited for failure to yield.