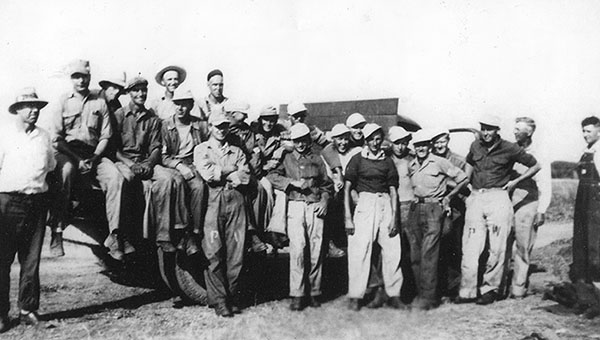 Henry Stensrud in July 1945 at a pea viner station near Hartland with German prisoners of war. Stensrud is third from left on the truck bed, while the rest of the men around him are POWs. All were housed at the POW camp in Wells. — Photo courtesy Wells Depot Museum

By Jerome Meyer, for the Albert Lea Tribune

This year marks the 70th anniversary of the end of World War ll. Germany surrendered unconditionally on May 7, 1945, and Japan surrendered unconditionally on Sept. 2 aboard the U.S.S. Missouri in Tokyo Bay. The last couple of generations in the United States probably relate to this war as a distant and past war and only know of it when it was mentioned in their school history class.

Unknown to most current Minnesota residents, the state had a somewhat indirect involvement in an unusual event in Minnesota’s history of World War II by housing thousands of captured prisoner of war troops from Germany and Italy from 1943 to 1946. Yet the historical information of these POWs in Minnesota is rarely noted in the war’s history and is all but forgotten.

By the end of World War II, some 425,000 German, Japanese and Italian POWs found themselves interned in the United States and there was no place to put them. When Minnesota veterans returned home in the fall of 1945, they were surprised to find thousands of German and Italian POWs housed in Minnesota camps.

The German and Italian POWs housed in the United States were located in over 500 area camps and were sent out to harvest and process farm crops, build road and waterways, cut down trees and build various structures partially helping out the labor shortage because of the U.S. troops sent overseas to fight in the war.

According to historical accounts, from April 1944 to February 1946, a huge POW base camp was created by the U.S. government in Algona, Iowa, covering the central Midwest states. It was one of 155 base camps in 44 states.

This camp hosted 10,000 prisoners during the war with an average population of 3,000, records state. From this camp, 34 branch camps were built in Minnesota, Iowa and North Dakota.

Minnesota alone hosted 6,000 prisoners during the war in 20 branch camps with all being temporary operations.

Locally, there were POW camps in Wells and in Hollandale. Wells housed camp No. 24 and had about 300 German and Italian POWs, who were sent up from the base camp in Algona in June of 1945, according to records. The prisoners were brought to the hemp mill north of town and helped remodel the plant building into barracks, a kitchen and outdoor latrines. But with the war winding down, the Wells camp had a short existence and closed in February 1946. 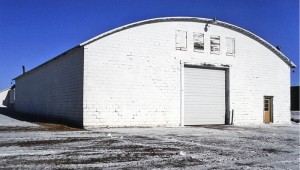 This white building at a farm in Wells, photographed in December, was the former site of POW barracks during World War II. Today, it houses farm machinery. — Jerome Meyer/for the Albert Lea Tribune

Some of the original POW camp buildings and barracks are still standing about a mile and a half north of Wells and are now owned by a local farmer housing farm machinery. Ken Stensrud of Wells still remembers his dad as a foreman over 19 German POWs working at a pea vinery near Wells.

During the time the Wells camp was open, it was very busy. By August 1945, 311 men were living in the barracks. Most of the labor provided by the prisoners consisted of picking and processing peas and corn and working in the local pea and corn canning factories located in Wells, Waseca, Fairmont, Bricelyn and Lake Mills. Some men worked as laborers in local grain elevators in Kiester and Frost.

The prisoners were paid 10 cents an hour by the government, not in U.S. currency but in scrip, which was only good at the camp canteen. After the war ended, the prisoners were shipped back to Algona several hundred at a time with the last leaving in February 1946.

Little information survived the Hollandale POW camp No. 16 as there are no buildings existing from the camp which was located southeast of town. Due to the extreme local labor shortage during the war, the German prisoners housed in the Hollandale POW camp found themselves working the marshland of Freeborn County ideal for vegetables such as potatoes, onions, carrots, cabbage and sugar beets that required delicate harvesting and handling with much manual labor.

Local farmers acting as the POW supervisors would simply go the camp and engage the prisoners for work in their fields. Few guards were needed for the POWs working on the farms as only a noon meal was required. No more than 12 hours of daily work was allowed.

One prisoner at the Hollandale camp expressed a radical difference from what they might have experienced back home and they were grateful of just having something to eat.

After the camp closed in 1945, some prisoners were sent back to the base camp in Algona and others to the branch camp in Fairmont. 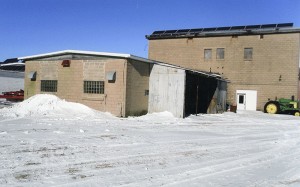 A second building that was part of the former prisoner of war camp in Wells remains standing. It is believed to have housed offices. — Jerome Meyer/for the Albert Lea Tribune

Albert Lea resident Bob Haskins remembers as a 13-year-old working in the same vegetable fields in the Hollandale area as the German POWs and described them as hard workers.

Local articles published about the Wells and Hollandale POWs stated that German prisoners were very good workers and obedient, but the Italian prisoners had a little more rebellion and needed more supervision.

Most workers were 18 and 19 years old. One Sleepy Eye POW camp had 16-year-old twins who were captured two weeks after they were forced into the war. Some prisoners stated the local area was nice and that they may come back to Minnesota after the war. Residents in Wells were reported to accept the German POWs as many local people were of German heritage.

By the war’s end, many of the German prisoners were sent back to Europe to work in French and English coal mines for as long as two years before being sent home.

Many prisoners wrote back to the Wells and Hollandale residents they got to know after returning to their home expressing their thankfulness about being treated well in the camps and telling about the horrible post-war conditions in Germany with everything destroyed, very little to eat, few clothes and few houses to live in.

A letter in the Wells Depot Museum on file was written by former Wells camp POW Heinz Rassbach to Henry Stensrud of Wells. “Do you remember me?” Rassbach asked in the first sentence of the letter. He asked if it would be possible to send food, coffee and cigarettes to his family in Germany. About 5,000 former German POWs housed in the United States later came back to the U.S. and became citizens and many more just came back to visit.