A year in the dairy farm life 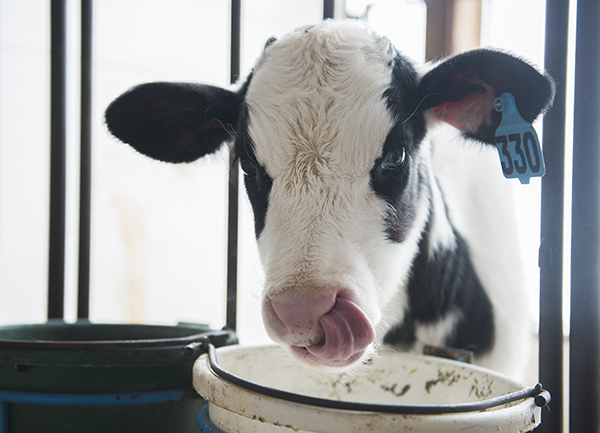 A calf at Miller Farms in Oakland laps up some water. – Colleen Harrison/Albert Lea Tribune

OAKLAND — At Miller Farms, something is going on every day.

John Miller owns Miller Farms outside of Oakland. He works the farm with his son, Jack.

Each month and season have specific tasks, John and Jack said, but some tasks are year-round. 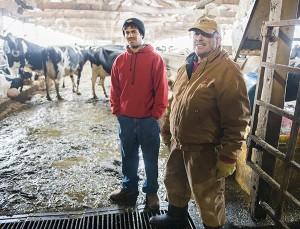 John Miller, right, and his son, Jack, run Miller Farms in Oakland. The run the farm on land that’s been in their family since 1957. – Colleen Harrison/Albert Lea Tribune

One of those tasks is breeding. Calves are born year-round at Miller Farms, so getting cows bred and raising calves are important tasks, John said.

In the building where cows are milked there is a dairy herd monitor wheel. Each cow is put on the wheel and is monitored when they can breed and during pregnancy. When the calves are born, they are put on the wheel and once they’re about 15 months old they will be ready to breed.

Gestation for cows is nine months, and typical lactation after having a calf is 305 days, Jack said.

While Jack said there are computer programs that can keep track of dairy herds, John said he is “old-fashioned” and that the wheel has always worked well for him.

The Millers also keep their herd healthy and well-vaccinated. John said a healthy heard leads to more efficiency and profitability. 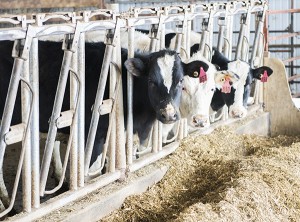 Miller Farms has about 300 cattle, and milks about 130 of them. – Colleen Harrison/Albert Lea Tribune

According to the Millers, spring, summer and fall are their busiest times of year.

John said February and March are when they have a lot of meetings and educational opportunities. March is also when John and Jack are starting to get ready to plant some crops.

Planting occurs in mid- to late-April. John said he wants to get out as early as possible for planting, but every year is different.

John and Jack said planting season is a busy time. Corn and beans are planted in May, and the hay will be cut by the first of June. 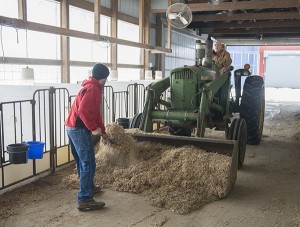 John and Jack Miller work together to bed the calves on their farm. – Colleen Harrison/Albert Lea Tribune

John said he usually gets four to five crops of hay a year. When the hay is in budding stage he cuts it, as he doesn’t want it to get too ripe.

By the time August rolls around, John and Jack said this is a slow time for the farm as they are waiting for harvest.

Corn silage is prepared from September to October and by the time October is in full swing, the Millers are combining beans and preparing cow bedding.

By the time harvest is done and if it hasn’t snowed yet, the Millers clean as much equipment as they can. They also have a heated shop to work on equipment after it gets too cold to work outside.

Daily, the Millers do 3 1/2 hours of chores in the morning and evening, and try to fit in any extra tasks they can do in between.

Milking begins at 6 a.m. and 12 cows can be milked at a time. It takes about six to seven minutes for the cows to be completely milked out, Jack said.

The Millers have about 300 cattle total, with about 110 being milked and about 20 waiting to give birth, Jack said.

Jack said his grandfather bought their current farm in 1957, and his family has been working the land ever since. 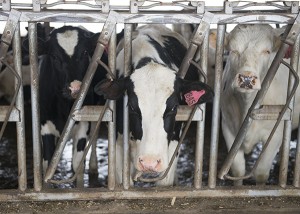 There are about 130 cows milked at Miller Farms in Oakland. Currently 110 are being milked while 20 are waiting to give birth. – Colleen Harrison/Albert Lea Tribune