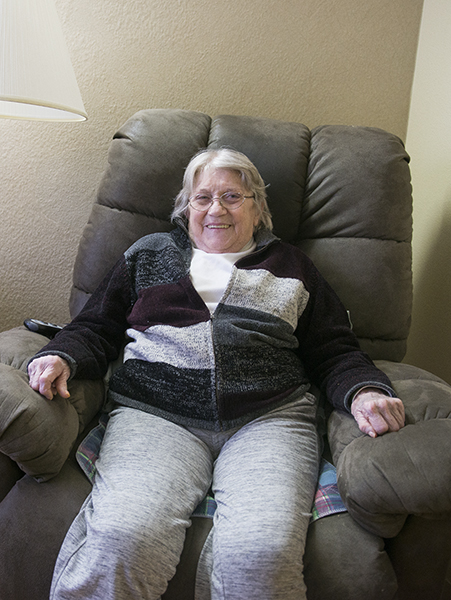 Gloria Lashbrook has been in a wheelchair for about a year. She has had both of her knees replaced, one of which got infected and will need another surgery. – Colleen Harrison/Albert Lea Tribune

Some places are better than others for wheelchairs

That’s what St. John’s Lutheran Community and Knutson Place residents Gloria Lashbrook and Donna Ball said it feels like when they face the difficulties of entering a building or getting around town in their wheelchairs and with their walkers.

Lashbrook, 71, has been in a wheelchair for about one year. She had both of her knees replaced, and after one became infected she’ll now need another operation. After having double pneumonia five times, she said she has to wait at least three months — during which she has to stay healthy — before she can have the surgery on her knee.

She said in the year she has been using a wheelchair she has noticed a number of places that are extremely difficult or even impossible for her to get into or around in. The church at the Salvation Army is not wheelchair accessible due to it being up a flight of stairs, she said. She noted she has had a friend who has fallen a few times while trying to access the same church services. 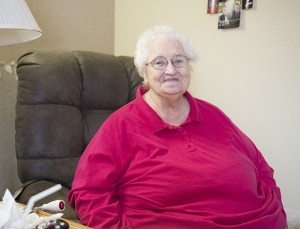 Donna Ball has been in a wheelchair for about a month, and was using a walker for nine years prior to that. – Colleen Harrison

Lashbrook, originally from Oceanside, California, has lived in Albert Lea since 1997. She said a number of the banks she has used in town aren’t wheelchair accessible, including Home Federal and Wells Fargo.

She likes to visit thrift shops and secondhand stores, but said a number of the ones in town are much too hard to get around in. She said the shops on Broadway like New to You and Mary-Go-Round Shoppe either don’t have access or don’t have enough space in the stores for a wheelchair to move through easily enough.

“I like to look through those shops,” she said. “I just can’t do it anymore.”

Ball, 80, said that she considered most of the shops in downtown Albert Lea to either have little to no handicapped accessibility.

Ball, an Albert Lea native, has been in a wheelchair for about a month and said she used a walker for nine years prior to that.

She said Northbridge Mall could definitely use some improvements, saying that having two sets of doors that don’t automatically open makes it extremely difficult for people with walkers and wheelchairs. She recounted a number of times where she has found herself doing a kind of balancing act trying to hold a door open with one arm while keeping herself steady on her walker with the other, all while trying not to get stuck between the doors.

The Perkins restaurant in town has a curb around the front entrance, Ball said, and to get to the entrance without a curb you’d have to go around to another side of the building. She said this wasn’t necessarily a big problem, but that when the weather isn’t the best it can become problematic. She also said that places like Applebee’s and the Elbow Room are difficult or impossible to enter and navigate through.

When residents go out to eat, Ball said she generally finds herself having to factor in if they’re going someplace where she’ll be able to maneuver around in her wheelchair.

Transportation in general is a major factor whenever Ball goes out. She said she canceled a sleep test in Austin because she would’ve had to pay $225 just for transportation alone.

Both Lashbrook and Ball said that there are places in town that do have decent access. Lashbrook said the library has good accessibility, as does the post office and the Taco King downtown. She said the courthouse does have wheelchair accessibility but that to use it she has to go around the the other side of the building from the front entrance, which can be a hassle.

Ball said that, in general, most of the churches she has been to in town have great wheelchair accessibility.

She also said that stores like Shopko, Walmart and other grocery stores have great accessibility — especially with the automatic doors that most have in place. She said residents have talked about going to other stores, but when accessibility is brought up it can be a deciding factor in which stores they decide to patronize.

“If they have it, then they get all the business,” Ball said.

Diane Wichmann, with the marketing and public relations staff at St. John’s, said that the local parks as well as the Freeborn County Fairgrounds are some other places that could use improvement.

She said when she and other staff have taken residents to the Freeborn County Fair in the summer, pushing wheelchairs on grassy or gravel areas is next to impossible. While there are some paved roads going through the fairgrounds, she said that going from building to building in some spots proved difficult.

Wichmann and Ball both agreed that the hospital escorting service at Mayo Clinic Health System was extremely nice, with Ball saying that the times she has gone there she has been greeted at the curbside and escorted all the way to wherever she needed to go, no matter the distance or the weather.

“It does seem like it’s becoming more of a trend,” Ball said about more places providing greater accessibility. “I think more people are thinking about it.”