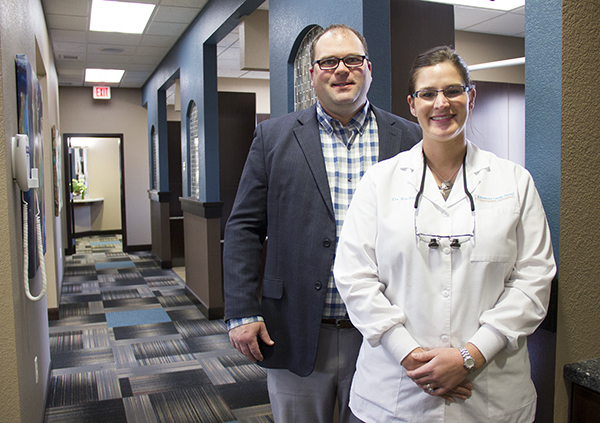 Three and a half years after purchasing Advanced Family Dental, Rachel and her husband, Kevin, last week opened a brand-new dentist office at 2717 Ekko Ave. in northern Albert Lea.

“It’s been a phenomenal transition supported by the community,” Kevin said. 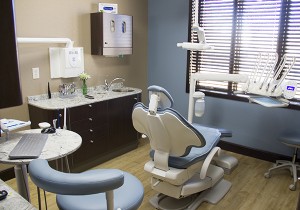 One of the nine operatories at Advanced Family Dental. – Sarah Stultz/Albert Lea Tribune

The business has just over 5,000 square feet — with additional room to grow — and features nine operatories, or rooms for patients, including two that can be closed for surgeries. In addition, there’s high-tech sterilization equipment, new X-ray machinery, a consultation room and a spacious waiting room, to name a few.

One piece of equipment called a cone beam computed tomography machine provides a three-dimensional scan of the jaw, which can provide more detailed information than traditional two-dimensional X-rays are capable. Rachel said this removes any shadow of a doubt for diagnosis of abscessed teeth or fractures and can be a powerful educational tool for patients.

The two-dimensional X-rays are still the standard of care in diagnosing dental decay and periodontal disease.

“This is definitely a premier clinic in southern Minnesota,” Kevin said. “The technology we’ve invested in is second-to-none.”

Televisions are mounted on both the ceiling and toward the top of the wall in each operatory to let patients watch a show or view their X-rays while reclined back for their check-up.

Kevin said one of the goals of the new office is to help patients feel comfortable coming to the dentist office and to feel a high quality of care.

He said Rachel has built her business around this mantra.

“Going to the dentist office shouldn’t be something you dread,” Kevin said. “Our big thing is making patients feel good about being in the dental room.”

Rachel said she practiced dentistry for four years in Faribault after graduating dental school and had always wanted to return to Albert Lea where she was born and raised.

When the opportunity came in 2011 to purchase Advanced Family Dental, she set the goal that after about 10 years of practice in Albert Lea she could consider building a newer, more modern dental office. That opportunity came much sooner.

Kevin said when they first purchased the business they had 1,200 patients and four full-time employees.

Today, the number of patients has exceeded 3,000. They have added a second dentist, Tricia Nelson, along with two hygienists, two doctor’s assistants and three administrative positions.

“One of the things that’s been a blessing is to watch Dr. Rachel truly live her dream,” Kevin said. “To be able to watch all of this unfold has been an amazing experience not only for me but for our team.”

The couple broke ground on the new building last August, and 98 percent of the work done was completed by local contractors, he said. He thanked the contractors for their work and for the entire community who has shown them support, particularly city leaders.

“I feel extremely blessed to, one, be able to be back in my hometown and be able to raise my family with my extended family, and, two, to have such a beautiful facility,” Rachel said.

She said she is excited about going to work every day and loves her job.

She and her husband hope to eventually lease out their old location to a specialist such as an oral surgeon or periodontist.