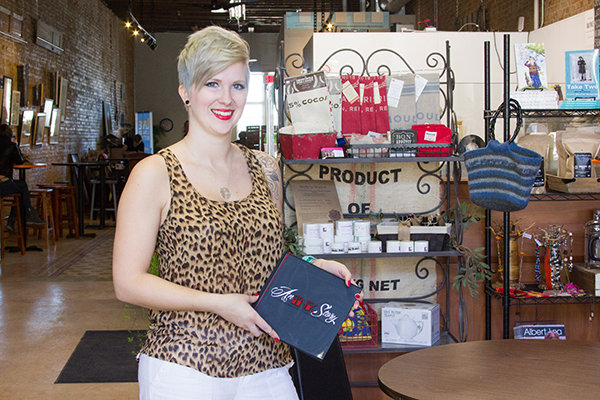 Holly Karsjens of Albert Lea will have a book release for “An Ink Story” from 5 to 7 p.m. Friday at The Interchange Wine & Coffee Bistro. – Erin Murtaugh/for the Albert Lea Tribune

Over a year ago, Albert Lea photographer Holly Karsjens attended a photo workshop. The instructor informed attendees not to burn out on the craft and to continue to fuel the passions and creativity of the art. Almost immediately, she came up with an idea for a book featuring people and their tattoos.

Now, a year later, that idea is finally coming to life. Karsjens will have a book release for “Ink Stories” from 5 to 7 p.m. Friday at The Interchange Wine & Coffee Bistro.

“I had hopes for what this was going to be and mean,” Karsjens said. “It has exceeded the original idea tenfold.”

Karsjens said she originally was doing the project for herself. The motivating factor was for her to have this book and share stories she knew were out there. Karsjens has experience that people being able to share their stories have helped with internalizing issues. Sharing their stories has brought light to their situations and helped bring closure.

“There are people who haven’t wanted to share their stories. People are using it as a way to cope. That was not a thought process in the beginning at all that this was going to help anyone else,” Karsjens said.

The book features 14 people and their tattoos. A few weeks ago, Karsjens received her very last submission.

She was at an expo with her husband and had been sitting next to an elderly man the entire weekend. Karsjens noticed an older-looking tattoo and decided to approach the man about her project since she had wanted to feature an elderly person.

The man was more than willing to share, but not about the tattoo Karsjens had originally seen. He had served in Germany and fell in love with a girl there. By a twist of fate, they were unable to continue their relationship. He got a tattoo of a pin-up girl and her initials in her honor.

Karsjens has seen a lot of excitement from the community on the project.

“I get surprised how many people know about it and are anticipating its release,” Karsjens said.

She said she feels she has a responsibility to showcase each story individually more than the book can offer. She hopes to have a show at the Freeborn County Arts Initiative building sometime later this year.

There will be a limited amount of books available to purchase Friday evening. After that, the book will be available to purchase online and shipped directly to the customer. Karsjens will have the link available starting Friday at the release and then will also post it on her Facebook page and website. They will cost about $25 each. The book is formatted to be a coffee table style book.

Karsjens said in the preface of the book, she wrote that she wants people to know that everyone’s voice and story matters.

“I feel like people are listening,” Karsjens said. “That’s what has surprised and excited me. Tell your story. Share your story, whatever it is.”

What: Book release for “Ink Stories”

Where: The Interchange Wine & Coffee Bistro