Area woman brings some shine to the horse show arena 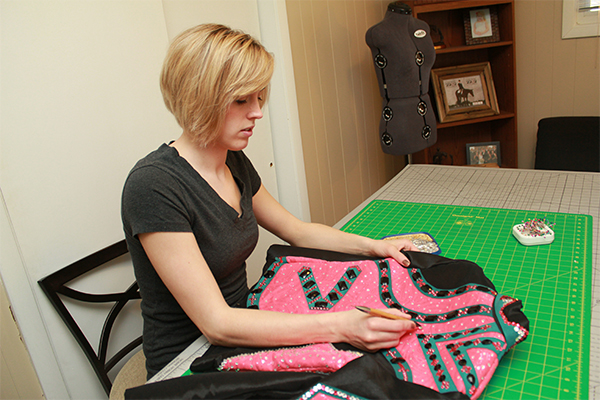 Ashley Peterson works out of her home in Alden on one of her many custom products. Peterson’s business, Signature Styles by Ashley, consists of western show jackets, chaps, button down shirts and horsemanship shirts. She is the wife of Derek Peterson. — Provided

Local horse enthusiast Ashley Peterson is bringing more than just her passion for riding, showing and training to the arena. 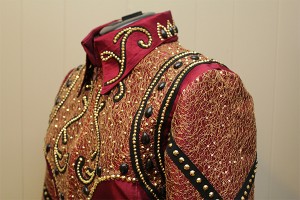 Ashley Peterson started sewing her own show clothes in high school. Now, she has her own business making and selling show clothes. — Provided

“I have made western show jackets, chaps, button down shirts and horsemanship shirts,” said Peterson, the owner of Signature Styles by Ashley.

Peterson said she has known how to sew since she was young.

“My grandma taught me and I always liked to craft and make things,” she said. “In high school, I started sewing my own show clothes so I could have higher quality clothes for only the cost of supplies.”

It wasn’t until 2013 that Peterson started sewing for others.

“I didn’t start to get real serious about building a business out of it until this year,” she stated. “I want to go to some bigger horse shows, and sewing became my way of earning the money to go. It’s a great creative outlet for me.”

Peterson said she enjoys working with clients on custom orders.

“It can be challenging to match what they have in mind with what I have in mind, and also what’s feasible from a sewing aspect, but it’s very rewarding to make a piece that the client absolutely loves and feels most confident in.”

Over the years, Peterson said she has no idea how many pieces she has created. Outside of her full-time job working as a radiographer at Mayo Clinic Health System in Austin, she tries to make one to two pieces per month.

“But it depends hugely on the design,” she said.

The love of horses started when Peterson was only 3 years old.

“I have been riding since I was 3 and showing since I was 5,” she said. “I show local open shows and regional AQHA shows. I train and show my own horses and take lessons when I can.”

So from the life-long outside hobby to the sewing table, Peterson said the process of the design begins with a base color fabric and, if it’s a custom piece, other colors the client has chosen.

“If it’s not custom, I just choose colors that complement each other and that will stand out in the show ring,” she said. “I take the measurements of the client and cut out the pattern in the base fabric. Most all appliques are cut out of Ultrasuede or leather.”

Designs can be anything, Peterson stated.

“Swirls and flourishes are really popular, and there are hundreds of them to choose from,” she said. “I get a lot of shapes from Cricut cartridges and clip art off the internet. It takes some time experimenting with different sizes of appliqués and how they should lay out on the garment in a flattering manner.”

According to Peterson, airbrushing is really popular and that’s something she’s started incorporating into designing as well.

“Next, I sew the design on the garment and any sew-on embellishments,” she said. “I will do one final fitting if it’s a custom piece. My final step is gluing on the rhinestones. This is my favorite part because rhinestones add all the glitz and sparkle! Each individual rhinestone is glued on so it’s very time consuming. I use Swarovski crystals in a variety of sizes and colors. Each garment I have made probably has at least 1000 plus crystals. You can never have too much sparkle!”

Peterson, who gets her inspiration from other designers as well as some runway fashion said the creative process is the most fun.

“The possibilities are endless when you’re sewing,” she said. “I love seeing a plain piece of fabric change as it’s made into a jacket. There are so many details to add to them and new ideas to try.”

Sometimes, she said, it’s finding a really unique fabric or embellishment and centering the design around that.

“Other times I choose swirls and flourishes that complement each other and make a design out of that,” Peterson said. “The creativity can come from anywhere!”

With the goal of continued growth and more custom orders, Peterson said completion time of all orders varies depending on the design and how much time she has to work on it.

“I have never kept track of how many hours it takes to make a jacket; I’m not sure I want to know,” she said with a smile.

Peterson can be contacted through her Signature Styles Facebook page.