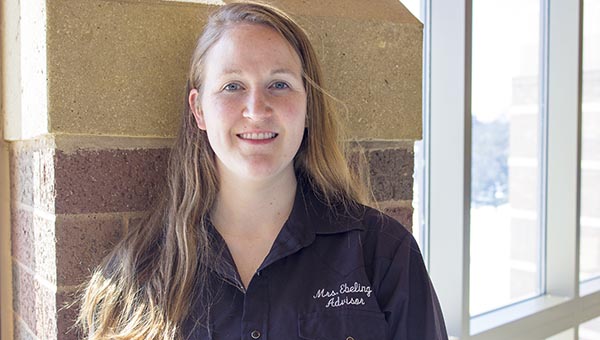 Christina Ebeling is the new agriculture teacher at Albert Lea High School. She replaced her former teacher, Kim Meyer, who inspired her to get into teaching. – Hannah Dillon/Albert Lea Tribune

Returning to her roots

An Albert Lea High School graduate made her way back to the school she graduated in as well as the class that inspired her to become a teacher.

Christina Ebeling grew up in the Albert Lea area, and now lives by Hayward. She graduated from Albert Lea High School and then went to the University of Minnesota for agriculture education.

She was inspired to go into agriculture education by her agriculture teacher at ALHS, Kim Meyer.

Ebeling said Meyer made her excited about learning, and learning more about agriculture. She was involved with FFA when she was in high school as well.

While she lived in the country she didn’t live on a farm, though her parents raised animals in the past. She didn’t raise animals herself until she and her brother started raising sheep through FFA.

After graduation she taught one year in Franklin, two years in Bridgewater, South Dakota, and four years in Beresford, South Dakota. It was then that she got a call from her former agriculture teacher.

Meyer was retiring at the end of the 2013-14 school year, and said Ebeling should apply for the job. She did and accepted the position and began teaching in September.

Ebeling said she never thought she would return to Albert Lea, especially to the class that inspired her to start teaching.

She said the year has been going well so far. She is involved with the youth apprentice program, where students interested in manufacturing and automotive get a chance to work in the community to learn skills and explore career opportunities.

Some of the companies Ebeling works with in this program are Lou Rich, Edwards Manufacturing, Vern Eide Chevrolet, Motor Inn, Trail’s Travel Center and Interstate Molding and Manufacturing.

Ebeling said she has eight seniors and seven juniors in the program who are placed at job sites.

She said the program is going well, and she’s learning as she goes. She said Meyer had strong roots with the program, and she’s trying to pick up the reins. While it is challenging, Ebeling said it’s a great asset to the school and the students.

Ebeling also participated in FFA Week, as she is the FFA coordinator. She took five students to the Capitol for FFA Day. The students got to sit in on an agriculture committee meeting and also met District 27A Rep. Peggy Bennett.

Above all, Ebeling said she’s excited to be back in Albert Lea. She said she’s looking forward to teaching more students and expanding opportunities for them, as well.

Outside of work, Ebeling has an 8-month-old daughter to take care of, so she said that takes up a lot of her time. Other than that, she likes to knit, sew and do other hands-on projects.

Interesting fact: She went to Switzerland after she graduated college to learn about agriculture systems.