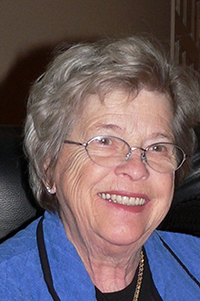 Arlean was born in LaMoure, North Dakota, on May 26, 1929, to Herman and Irene (Anderson) Henrikson. She grew up in LaMoure and graduated from LaMoure High School in 1946. Arlean was an excellent student and graduated valedictorian of her class.She continued her education at Concordia College where she studied bookkeeping. She moved to Pipestone to work as a bookkeeper and it was in Pipestone where she met her future husband, Robert T. Quackenbush.

The two were married Nov. 6, 1949. They moved to Windom and then eventually to Albert Lea in 1954 where Robert worked at and eventually purchased the Bergen Insurance Agency, later to be named QBC Insurance.  Arlean was the bookkeeper for their business as they raised their family. They also owned World Travel Agency and enjoyed traveling together.

Robert and Arlean sold their businesses and moved to Austin in 1988. Robert continued to work in different banks in Austin and Arlean enjoyed family and friends. Robert died May 4, 2007. Arlean remained involved in different activities around the Austin area, including PEO, until she moved to Chanhassen in 2010.

Arlean was a member of First Lutheran Church in Albert Lea and St. Olaf Lutheran Church in Austin. She loved golf and was a member of the Albert Lea and Austin country clubs. Arlean was an avid bridge player — even in her final months she was winning at bridge. Most importantly, she loved being committed to her family. Arlean and Robert had a “perfect balance of faith, family and work” in their lives. Anyone who was lucky enough to be a part of her family felt her unconditional love.

A public visitation will be from 11 a.m. to 1 p.m. Saturday at Mayer Funeral Home in Austin. The graveside ceremony will be private at Frankford Cemetery of Spring Valley.

Online condolences  can be left at www.mayerfh.com.