17-year-old believed to be in Austin or Rochester

Albert Lea Police are asking for the public’s help in finding a missing 17-year-old boy.

Police received a report Saturday that Netza Banuelos was last seen one to two weeks ago and issued a news release to the media Sunday morning. 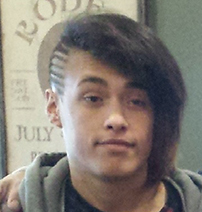 Banuelos is described as being Hispanic, about 5 feet 4 inches tall and weighing 110 pounds. He has light brown skin, black eyes and brown hair, the release stated.

His hair is long on one side and shaved on the other side, and he may be carrying a rainbow or multi-colored backpack, according to a news release.

Albert Lea Police Department Lt. Darren Hanson said police do not have reason to believe Banuelos is in any immediate danger.

“We’re just looking to find out that he’s safe and get him back to his mom and dad,” Hanson said.

Banuelos is initially believed to have traveled to Austin on his own but is now believed to be in the Rochester or Austin areas.

Anyone with information about the location of Banuelos is asked to contact their local police department or the Albert Lea Police Department at 377-5200.